You are at:Home»Travel and Travelers»Getting to the Top of North America: The Dalton Highway 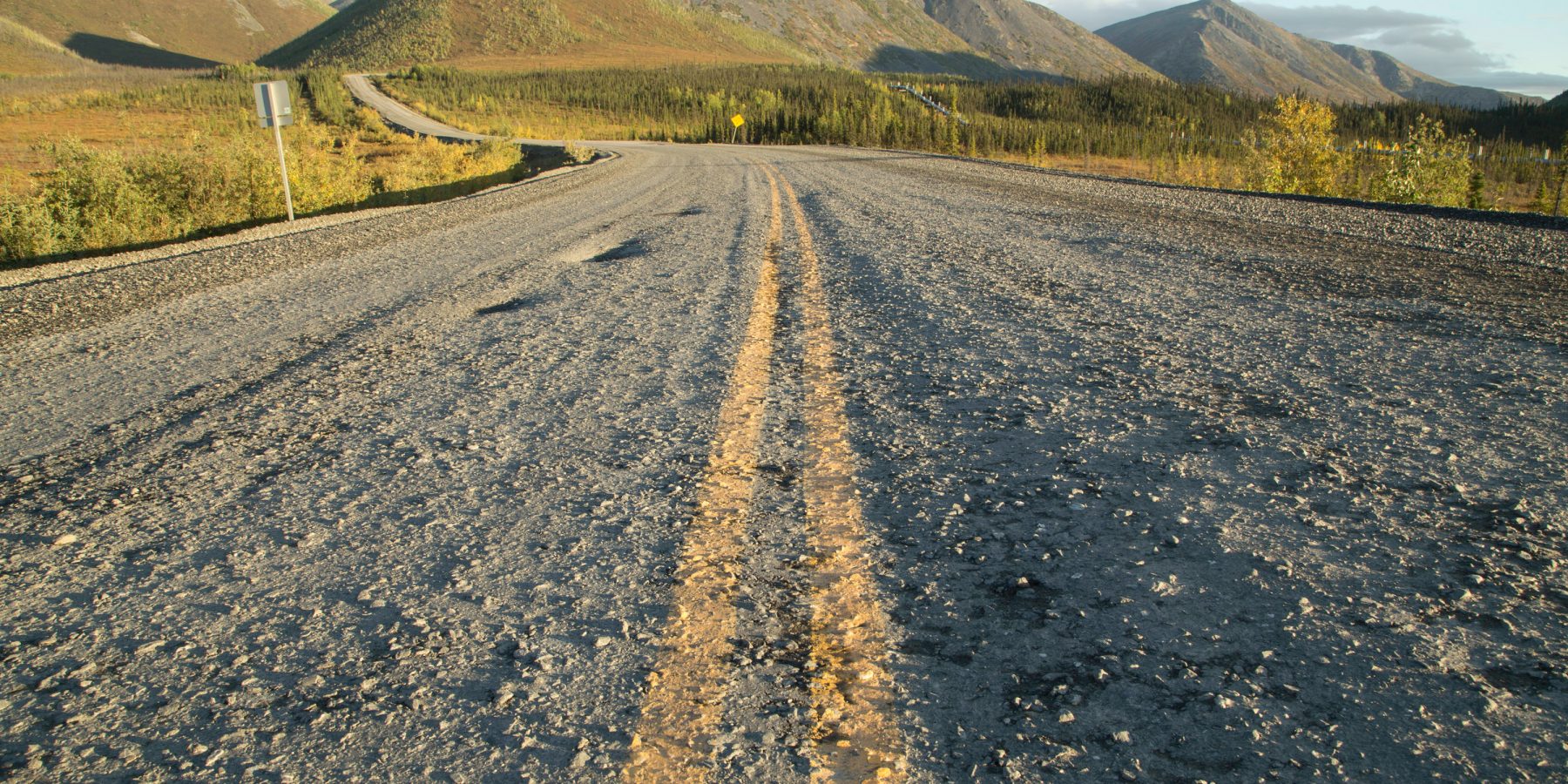 Getting to the Top of North America: The Dalton Highway

What was the Dalton Highway for us? It was the epitome of Alaska, the Ultimate Road, the Middle of Nowhere, the True Start of the Panamericana. It was the most challenging, most remote place we had ever decided to take Big Emma. And what is it now? Did it live up to our dreams, to the high expectations we had set for it?

When we begun discussing traveling the Panamerican Highway, back a forever ago, I looked it up on Wikipedia. I discovered that, despite the fact that it is only an unofficial name for a number of different roads and routes spanning North and South America, two things were generally agreed upon: the road ended in Ushuaia, Argentina, and it began in Prudhoe Bay, Alaska, at the town of Deadhorse – a town over 400 miles from the rest of civilization at the end of the Dalton Highway on the northern coast of the continent.

We had heard everything about it. We had heard it was the definition of a shitty dirt road, that it was full of potholes, that your car would come back looking like a pock-ridden teenager. Wheels bent, flat tires, window chips and cracked windshields, chipped paint, you name it. People said it was really tough. There was a reason the town at the end of the road was named ‘Deadhorse’. Some others we knew, also traveling in Buses, said they would have to be crazy to take their beloved vehicle on the Dalton. Others did it with barely a scratch, not a single flat tire. Many we met who had undertaken the journey said “Well, it actually wasn’t as bad as they all said”. Our only conclusion was: we had no idea what to really expect. But we knew we wanted to go, we had to at least attempt it. And we had to do it in Big Emma. We had to try our best to get to the top, and bring all three members of our small party with us.

We only had one spare wheel, and of course our growing collection of spare parts and tools. We also found two traveling companions for the ride. We welcomed the company, of course, and had heard that the price of gas up in Prudhoe Bay was about six dollars per gallon (it is about $2.10 in Illinois, and about $2.60 in Fairbanks), which meant everyone was interested in splitting the costs. We packed our bus with food (there are no grocery stores along the Dalton Highway), did a few Big-Emma-tune-ups, and hit the road.

It was, indeed, a long, long dirt road. Potholes galore. To the east and west you could see nature in its fullest stretching out around you, literally in the middle of nowhere. The only hint of humans being the Trans-Alaska pipeline, razoring the landscape over 800 miles to transport crude oil, one of the largest construction projects in Alaskan history. The Dalton Highway is a trucking route. Trucks are the kings of the road, so we pulled over and let them speed by at their 50 mph. We went a comfortable 25 or so, playing dodgeball with the potholes. The road was sometimes kind to us, with patches of asphalt. But, as the woman at the tiny visitors center at Yukon Camp (Mile 56) told us, asphalt just means you can see the potholes better. Any kind of road just doesn’t last very long here, giving way to melting permafrost beneath it.

We reached the Arctic Circle (Mile 115), camped and had fun and got to know our travel companions, people we barely knew a day ago. And on day two, as we drove along a nice long stretch of asphalt, we heard a very loud, ominous CLUNK.

After checking it out, finding nothing, driving a bit farther, and hearing a few more CLUNKS in growing frequency, we pulled over. After much debating, fearing it might be something in our transmission, we came to the conclusion that it was probably a CV joint (one of the things we had taken apart and cleaned back in Anchorage, but also one of the parts that are notorious for breaking on rough roads like the Dalton). We had a spare. We changed it out, pulled the wheel off to do a few touch ups on the brake on the other side of the car, and went for a test drive in the dying light of dusk. Things seemed alright, and then – THUNK CLUNK GREEESZ PLUNK CLUNK. My first thought was F*CK, it was the transmission after all (if it was the transmission, that would mean that we could not drive any further, that we would have to get towed over 100 miles back to anywhere, and that our car would need some of the most difficult and expensive repairs that we could think of, none of which we were capable of doing ourselves. Basically, that would be hell). And then Sven looks out the window and we realize that we had won the BusDarwin Award of the year: the wheel had fallen off, where we had messed with the brakes. We, geniuses as we are, had failed Mechanics 101 – we had forgotten to tighten the lug nuts.

I stepped out of the car, looked at Big Emma, and thought I was going to vomit. My precious, sturdy vehicle, a wheel stuck sideways underneath her, wedged between the ground and the body of the car. In a curve. On a downhill. Various parts banged up and damaged, and the bare brake housing having skidded about 15 feet along the asphalt, I thought we had just screwed up badly enough to end our trip in Fairbanks, after what was sure to be an expensive tow back to the rest of the world. Sven got back to camp, got our friends, the jack and various other tools, while I made sure trucks coming around the bend didn’t total our Bus completely. We found the lug nuts, and we got our spare wheel on, not quite trusting the one that came off. We slowly rolled ourselves back to our camp, about 1/2 mile down the road, utterly exhausted.

We waited out the night, and I had nightmares of getting towed, putting the trip on hold, wheels flying off and us crashing over the side of a cliff. The next day we checked everything out, and deemed we could go somewhere, if we took it slow. We had to get to Coldfoot (Mile 175), about thirty miles north. It is one of three places to get gas on the Dalton, and we didn’t have enough to turn around. So we went, slowly. And encountered no problems on the way, sturdy on our now slightly-less-sturdy four wheels.

The two things of which we would most likely need a spare on the Dalton – a tire and a CV joint – we had used. We did not have a second spare of either. I had stayed awake at night imagining the catastrophe of hiring a tow truck up here, and had no desire to see my dreams come true. With heavy hearts, we decided for prudence, and knew that it was time to turn our wheels around. We had heard the road between Coldfoot and Prudhoe was even rougher – construction and heavy rains had taken their toll – and we knew we had made the right decision. We were disappointed, and imagined all the things we had yet to see. But as much as we wanted to see and reach Prudhoe Bay, we did not want it so badly as to damage our beloved Big Emma. We had gotten to our secondary goal – the Arctic Circle – and that was enough.

We went the extra 10-or-so miles to the town of Wiseman, Alaska (Mile 189), had lunch, and turned around. From here on, we were heading south. And we had long, long way to go. That night, we saw the northern lights dance above our campsite on the Arctic Circle. And it was beautiful.

When we were getting back into Fairbanks, it started to rain. We looked out the window, and saw a double rainbow. Riding into a pullout, we parked the bus under it. You could see both ends, something I have never seen before. It wasn’t Prudhoe, but it was beautiful all the same. And we still have thousands of miles of beautiful ahead of us.