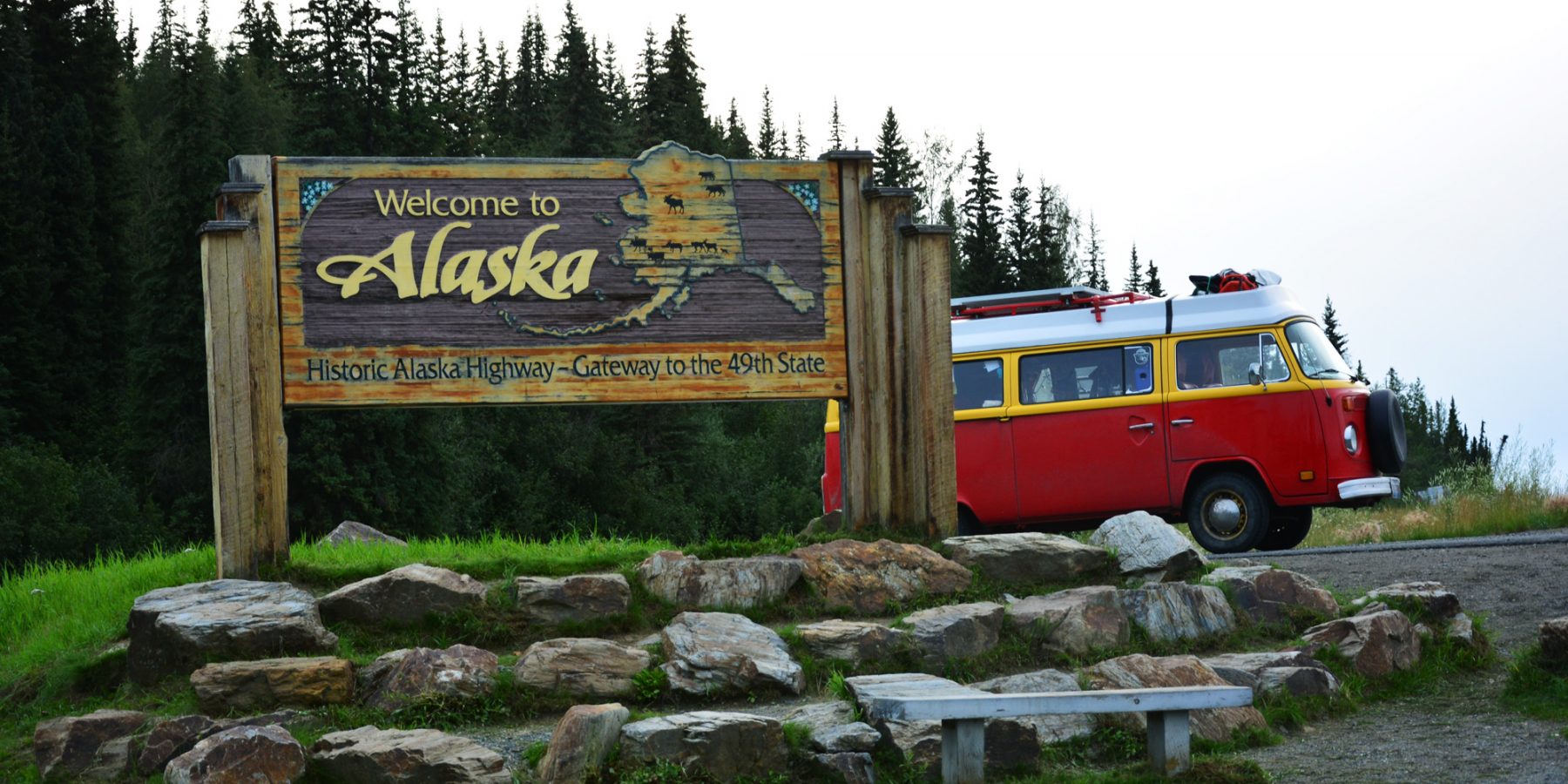 Alaska, The Land of Dreams

Along the Alaska Highway, we made our way towards The Last Frontier. Just like the gold rush prospectors over 100 years ago, we yet had to find out if the real Alaska could live up to the one in our dreams.

Alaska. This dream, far away, white, cold, rocky. A fairy tale land, inhabited by bearded goldrushers and grizzly bears. A myth, just a glitch on the map some cartographer made up to debunk copycats.

Until we actually set foot in it. We had driven north on the Alaska Highway for days, through endless forest that started out thick with tall trees. The farther north we got, the flimsier and smaller the trees got. Burn areas appeared and flew by, black spikes looming into the sky, a trace of when this place was turned into hell on earth. We don’t care, we just drive by, but the trees remember and they force us to relive their ordeal in our minds, just for a second, then, woosh, we are in deep green forest again.

The mosquitoes multiply with every mile we get closer to Alaska, like they were trying to compensate for the smaller trees, keeping the general amount of bio-mass equal. Sometimes it rained. Sometimes it took an hour to meet another car. Everybody passed us, semis and sedans alike. The trucks we would meet again at the next hill, when they crawl up going 20 with their huge trailers. We would almost reach them going 35, but then the hill was over and they flew away.

And then, just like that, we reached Alaska. We came upon the border, had a short chat with the officer, he didn’t care one bit, and off we rolled into the Last Frontier.
Alaska! Here we were, not a myth, not a far-away land, but the very soil we were standing on. It’s real, it’s here, it makes noise and dust flies up when I scratch it with my foot.

We had reached the town of Skagway. Once the wrooming epicenter of the Klondike gold rush with hundreds of thousands of people arriving in hope of panning some shiny metal nugget out of a river, today’s gold rushers are cruise ship tourists, crawling the streets in their khaki shorts and tennis socks, camera always at hand. They don’t have to pan for gold any more, it is readily available at the jewelry stores that line Broadway. Store next to store, another one across the street, 10 more just down the block. The same stores that they have on the ships, someone told us. But the goldrushers don’t care, they run in and buy, just like their historic counterparts, even though they never even saw a nugget of gold, still came and panned and panned like robots in a factory.

Of the 100.000 people that came here, only 30.000 made it onto the gold fields. Another 4000 of them actually found gold and made some money, the ones that achieved the dream and got rich were even less, and the people who managed to hold onto their wealth and didn’t get tricked out of it or killed would have been only a few dozen. The Klondike, this nebulous dream for millions of people, made only a few dozen people rich. This is what Andre told us, a guide for the cruise ship tourists.

For thousands of people, this shiny false dream of Alaska ruined their lives. How will it be for us? We too, after all, are out for a fortune just like the gold diggers. Only that for us it’s not metal flakes in a river, for us it’s adventure and the experiences we make. Alaska, the land of bears, salmon, spruce trees and glaciers, will it live up to the expectations we have created in our minds? And what about the rest of the trip? Will it happen the way we dream it now? Will Columbia be as beautiful and friendly as I imagine it in my head? Are the waterfalls in Iguazu as tall as I think? Does Pisco really taste the way I remember it?

But then: Does it really matter? Many of the people who came for the Klondike ended up making a living catering to the gold digging crowds. They worked in bars, restaurants, brothels. They stayed and started families, whose descendants now call themselves Alaskans. Whatever side of Alaska we will see, and whatever this trip has in stock for us, it will be intense and wonderful, maybe sometimes in a way that we can only appreciate after it’s all over. Let’s see. For now, bring it on Alaska.