You are at:Home»Vanlife»Snapshots: Lessons on Minimalism 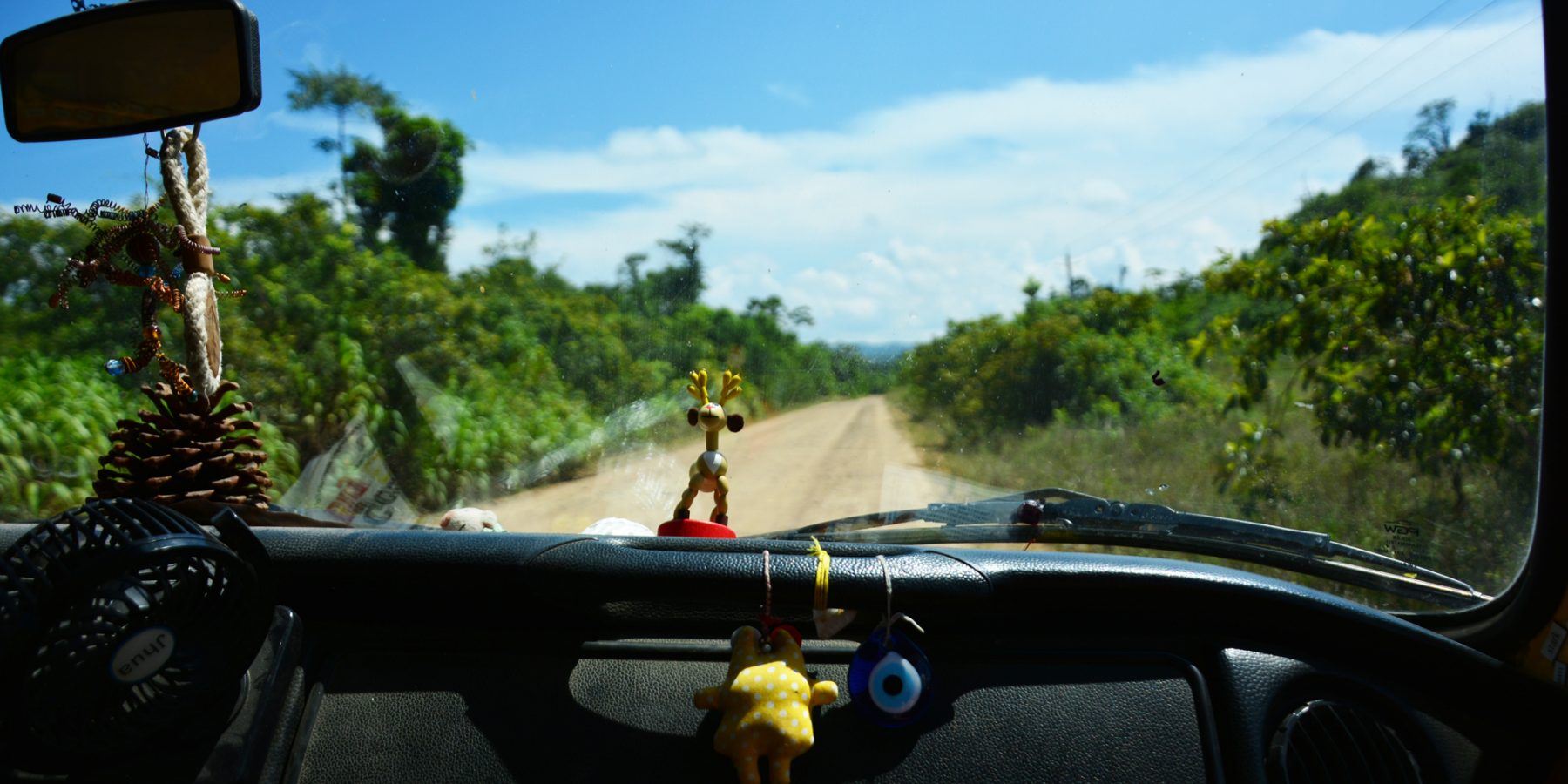 Traveling like we do teaches you to change your perspective. Things that were once important don’t always stay that way; other things take their place. Changing your perspective, however, is what makes every day of travel an adventure.

Say it because it looks good

I get so tired of it. You hear and read it over and over again in the vanlife community. All the time, people seem to be talking about how much they love living minimally. Minimalism and anti-materialism are such buzzwords, so good for bragging rights among vanlifers. But then, everybody loves to compare their expensive camping gear or lend their high-tech whatever to me because I don’t own an expensive high-tech whatever. I wonder if everyone living in their van is actually as happy about living minimally as they claim. There are days when the adventure surrounding Big Emma gets so thoroughly sucked out that all I feel is how tiny and cramped and humid she is. I feel like all I see are people posting pictures and telling the world how happy they are to live in such as small space all day every day. It doesn’t always feel small, but it also never feels big. Loving minimalism my ass.

How much mud is worth 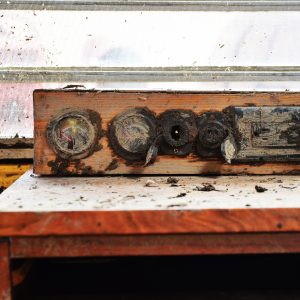 I picked through my muddy possessions – literally everything that I owned was filthy – and mentally asked myself a number of questions. Would this thing still function as it was supposed to? No? Into the wheelbarrow it went, along with the rest of our stuff we deemed useless enough to throw away. Was this valuable enough to figure out if it was working? Yes? Into the pile of stuff that needed to be washed (and then probably washed again) it goes. Water purifier: keeper pile. Lighters and flashlights: wheelbarrow. Anything made of paper went straight into the wheelbarrow, anything made of fabric we would at least attempt to wash. Every once in a while, one of the people working at the mechanic’s yard would walk up to the wheelbarrow. He would pick up the flashlight, or the walky-talky, and ask, But why do you want to throw this away? I bet we can fix it! I had so much washing to do, I was glad that these small, unimportant objects were out of my line of sight. All this extra stuff was mucking up my brain, making the list of crap I had to deal with longer. Please, I said, if you can fix it, you can have it.

We are driving through rural Chiapas. In every village, the streets are lined with small, wooden market stands where the locals, usually women, were selling clothing. And, to my annoyance, yellow – my weakness if it was expressed in color – seemed to be the primary theme, often in dresses that were embroidered and in traditional styles. I have already bought two dresses in Mexico, and I do not need another one. I look away and we keep driving, my resolve and my budget not wavering an inch. When we make camp with friends that afternoon, I mention my steadfast resolve against tempting yellow clothing. But why don’t you just buy one? My friend asks. It’s all so cheap! I smile at this argument, one that I keep hearing over and over again from other travelers. Yes, but just because it’s cheap doesn’t mean I can afford it, I answer. And I can’t keep buying clothing, I don’t have anywhere to put it. She smiles, Yes, but you can always send it home! I turn away and wonder, But then what would be the point of buying it, in the first place?

I’ve been back in Illinois for a week and I have still not undertaken one of my favorite activities – visiting the grocery store. My mom keeps telling me to put food I want on the shopping list. I think about what I could pick. I could choose anything. I have the luxury right now of living with my parents, and they pay for the groceries. What do I want? I open the doors of our full-size fridge – which is taller than I am –  and ponder the contents. I don’t need anything. We have everything I need to make coffee. We have fruit, and lunch materials, and I can figure out how to make dinner from the random things in the fridge, just like I’ve been doing for the past year and a half. Where the possibilities of mom and dad’s grocery list once filled me with excitement, it now just leaves me feeling bland and uninterested. Why should I want something else when I already have so much to choose from? I go back upstairs, the list remaining lonely and empty in the kitchen.

When you’re suddenly faced with the impending decision, it is easy to make: What are my most important possessions? I only had about five minutes to think of the answer while the water level rose. Of everything we had with us in Big Emma, what were the most important things to save? Three major categories came to mind. The first group was A Travelers Best Friend: passports, access to money (aka bank cards), spare cash, phones, car title (I actually forgot that one at the time, and kicked myself for it later). Category number two was Expensive Shit: laptops, cameras, harddrives. The third group was Stuff We Immediately Need: a pair of shoes each, underwear, laptop cables, the machete, a water bottle. It was that simple. All of it went into the nearest bag we could find. We walked out of the flood carrying this stuff and whatever other random objects had found their way into our bags. The only thing I regretted leaving behind was already up past her wheels in water, and there was nothing I could do about that.

Hiding behind the cereal box 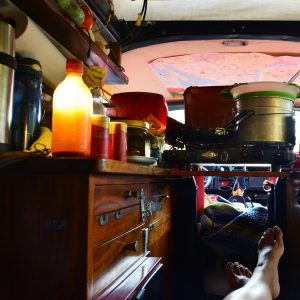 What do you want me to do with the coffee can? Sven asks one warm day on Baja. I ponder said coffee can. Well, we might be able to use it for something. He raises his eyebrows at me dramatically, Yeah, he says. I blame his skepticism on lack of foresight and put the coffee can behind our cereal container. It rides with us, miles and miles. In Quintana Roo, five months later, I am rearranging how we store stuff in our Bus. I rediscover the coffee can, sitting empty and unused behind the cereal container (which is also not being used, because we haven’t been that into cereal lately). I pick it up, turn it over once, and throw it in the “maybe someone here at camp can use this”-box and continue sorting through our possessions with a rejuvenated vigor. After a second, I decide to add the cereal container to the box, too.

Minimalism is such a trend these days. Tiny houses are booming. They feel both convenient and inconvenient at the same time. It makes sense that our generation is into minimalism and new lifestyle forms that it has brought on; we grew up on the backend of the generation where everyone wanted to buy houses, and many of our parents’ values were born in the backlash of post-WWII materialism. It’s no wonder so many people have decided they want to do things differently. I wouldn’t say Sven and I are minimalists though – rather, we forced ourselves to become minimalists because we wanted to travel. We are also not poor, even though we feel like we are. We chose not to get stable jobs (and stable incomes) back at home and went with We’ll just figure it out instead. What a luxury. We come from a privileged background that allowed us to choose to have more time than money, and decided to live with little. Unlike most who have to live on our budget, however, we have a safety net, that includes credit cards and a good Western education. Minimalism? We are simply the facade of what could pass for it on a shiny poster.

Unpacking things you leave behind 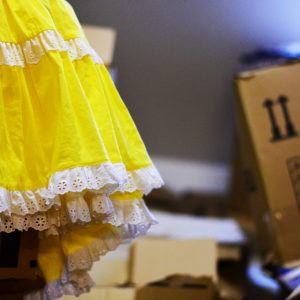 Of course we were home in winter. My least favorite time of year. Don’t get me wrong, Glühwein and the first snowfall are nice, but they just can’t trump consistent tropical heat. I contemplate coldness and go back to the task at hand: looking through boxes of our old possessions we left in Sven’s dad’s attic. I forgot I had so many clothes. I open another box and find that old yellow dress. And some high-heeled shoes. A part of me is joyed, because I really loved these things. Should I unpack them? No, I decide. I don’t want to walk through the snow in high heels, my hiking boots are warmer, and waterproof. And the dress? That one is harder. But let’s be honest, I think, I would rather wear my fleece stuff. It’s warmer. It’s more practical. And back into the box goes the dress.