You are at:Home»Travel and Travelers»Hidden in the Jungle: Real Life on the Riviera Maya 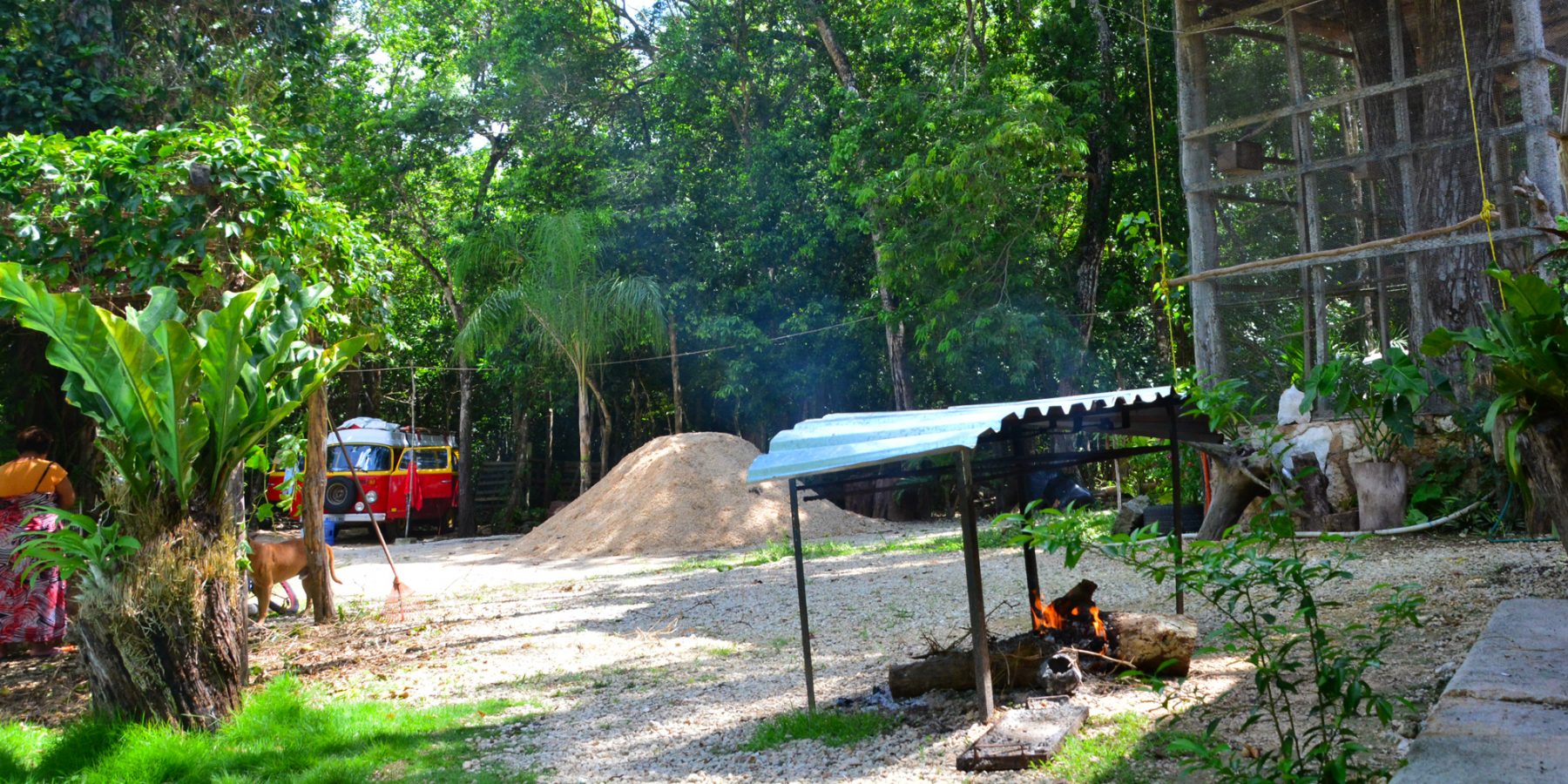 Hidden in the Jungle: Real Life on the Riviera Maya

Cancún and the Riviera Maya are known around the world as tourist hotspots and resort paradises. But under even the thickest layer of tourism, there is a real, local life beneath. We dug deep, and we found it.

When planning a vacation to Mexico, it’s safe to say you’ll be looking at the Riviera Maya on the Yucatán peninsula as a possible destination, and most probably at its major city, Cancún. The beach city on the east coast of the peninsula (Cancún is actually not located in the state of Yucatán, but the one next to it, Quintana Roo) is world-famous for its beaches, hotels, and all-inclusive resorts.

Gringolándia is a word in Mexican Spanish that describes a place dominated by white tourists. Cancún and the Riviera Maya fit this term better than any other region in the country; with more tourists than Mexicans, a place that has molded itself so much to the likes of the (mostly US-American) visitors that it’s hardly distinguishable from Florida or Southern California.

Driving the coastal highway north towards Cancún, the area lives up to this promise. Starting just south of Tulúm, the carretera is lined with vacation resorts and golf residences (gated communities, where you live on a golf course) – or what is visible of them. A tall concrete wall or a thick layer of vegetation hides the hotels and villas from our eyes. From the road, we only see the gated entrances, arcs so enormous they would be fit for a medieval king’s palace, armed security personnel, and gates with their barriers down as if it was a border crossing. 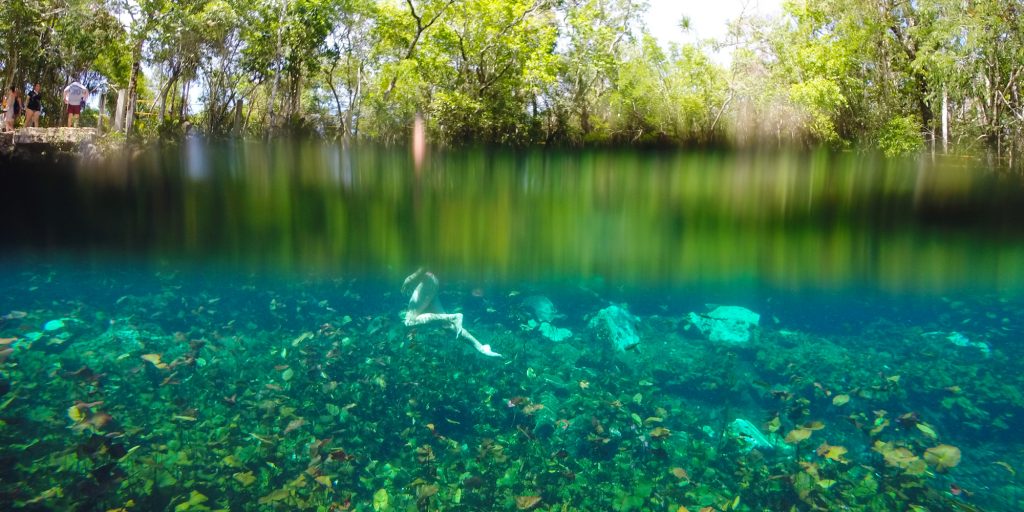 Beautiful Riviera Maya, above and below the waterline

Billboards along the road promise exclusive houses among picturesque parks, complete with maids, golf carts, private supermarkets, and even cenotes. Others advertise the ultimate adventure experience. Diving in cave systems, exploring private Maya ruins, and ziplining through the jungle.

Continuing north, we drive through Playa del Carmen, something like Cancún’s little brother. Bars and restaurants line the main street, serving giant margarita’s we haven’t seen anywhere else in Mexico. This truly is tourist territory. It’s the American fantasy-come-true of a vacation in Mexico, a region that has molded itself to the foreign expectations of what it should be like.

But even the Riviera Maya has its own roots that grow beneath the 2-for-1 margaritas. A Mexican one, hidden behind the billboards and fancy hotel fronts. During our last month in Mexico, we decided we would stay in one place, instead of getting back on the road every few days to explore new areas. We would relax, recharge our batteries, and along the way try to unravel the layers of tourism and dig for the other Mexico that lies beneath.

And we did find it. We spent two weeks at a campground outside of Tulúm, a small town about an hour south of Playa del Carmen. Tulúm is still touristy, with its own zona hotelera stretching along the waterfront, and a set of Maya ruins overlooking the ocean, but it’s a sleepy village compared to Cancún or Playa del Carmen.

Campground, zoo, and home all in one 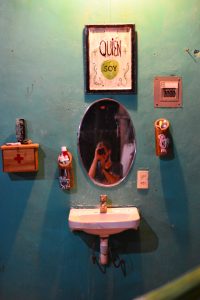 Our camp is located in the jungle, a kilometer off the highway at the end of a dirt road with potholes so deep we stalled the car once driving through a puddle after it had rained. A giant birdcage is home to a variety of pigeons, parakeets, and a talking parrot named Pepe. Bobby, the guard dog, is dozing under the giant palapa, the main common area with hammocks, chairs, and a massage table. A peacock couple rooms the perimeter, and so do Pancho, a curious but friendly wild boar, and King Kong, a giant toad the size of a soccer ball.

Selva El Jabali is, apart from us and a few other short-term visitors, the semi-permanent home of a colorful mix of people. There is Thomás, the vegan chef and owner of a (of course vegan) restaurant in the zona hotelera. There are Jorge and Alejandra. Originally from Hidalgo, and state north of Mexico City, they came here as tourists and stayed. They work as the cleaning crew of an art gallery in town, and Jorge makes some additional pesos selling coconuts to tourists along the beach. A few days into our stay, Gonzalo shows up. He’s from Argentina and came to Mexico for a fresh start in life. Despite his constant effort, finding a job in the area’s busy tourist industry proves to be more difficult than anticipated.

The beauty of everyday life

Every day, Jorge, Thomás, and Gonzalo hitch a ride into town, some going to work, others applying for jobs. Sometimes they only have to wait a minute for a car to pick them up for the 10-kilometer drive into Tulúm, sometimes it takes them an hour or more to find a ride. We take them in the Bus whenever we’re going to town, but even so, having to wait by the side of the road doesn’t seem to bother them much. Life is slow here. People have time. Sure, it would be good to be at work by noon, but if they’re not, well, then they’re not.

At night, we sit around the kitchen table and trade stories. The residents of Selva El Jabali all come from different corners of the country, they all have their own local traditions, their favorite places and local dishes, and Thomás knows the recipe for a vegan version of all of them. Everything he cooks and puts in front of us is pure delight. One night he makes us coconut ceviche, another time we try his vegan hamburgers made of cooked grains.

One day we go fishing with Jorge and Alejandra. We meet Gonzalo on the beach and he joins us. Despite our combined efforts, we don’t catch anything. Next to us, an older gentleman, a passionate fisherman whose eyes get wide with delight every time the line tightens, pulls out one foot-long fish after the other. But it’s fun. We fish, we drink beer, we talk, we all huddle up together in the Bus when it suddenly starts pouring. For maybe the second time, after our month-long stint as employees of a guesthouse in Guadalajara, it feels like we have made Mexican friends in Mexico. 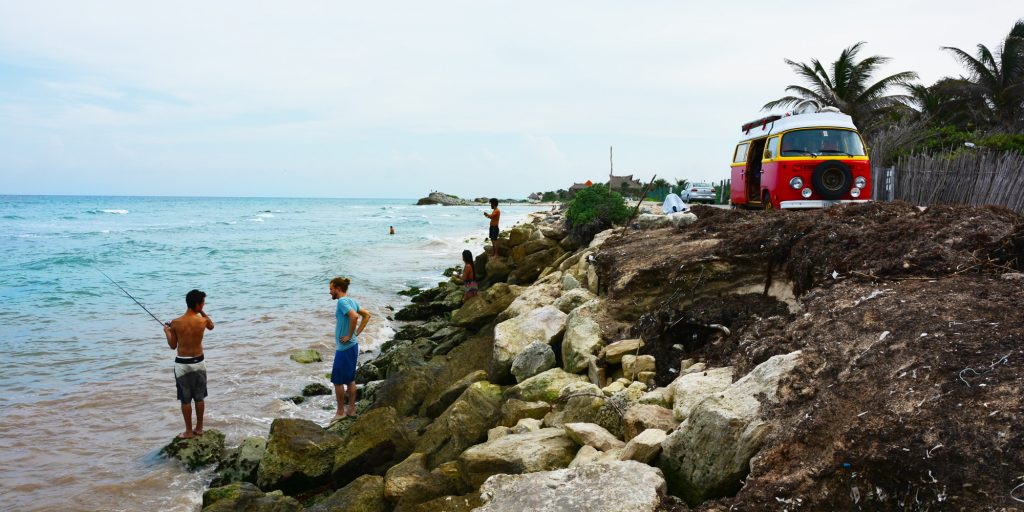 There have to be fish in these beautiful waters. But why don’t they bite our hooks?

A place to call home?

The landlady at the campground is planning to sell some of her property. 10 units of one hectare each are on offer. Thomás, as well as Jorge and Alejandra, are thinking about buying land from her and making the jungle outside of Tulúm their permanent home. Alejandra talks about building a farmhouse, growing crops, and creating a homestead for raising their future children. This is a good place, I could imagine settling down here. Surrounded by jungle, away from the crowds, with these fine people as my neighbors.

But even though we feel like we have escaped the tourist craze, it is never far away. Tulúm’s local government is thinking hard how they can get a piece of the giant wedding cake that is American spring break and summer vacation. An airport is being planned, the blueprints put the runway just three kilometers from Selva El Jabali. Although both Cancún and Playa del Carmen have large airports and the latter is only an hour away, Tulúm believes it needs to build its own. Construction is supposed to start within the year.

Maybe around the same time that Jorge and Alejandra set down the first stone of their new home and Thomás plants the first trees in his garden, bulldozers will start flattening the jungle just a stone throw away. While the economic future for the Riviera Maya shines bright like an airport runway in the night, it will become harder and harder to find the real Mexico under the concrete layers. And it will become more difficult for ordinary people like Jorge and Alejandra to carve out a piece of paradise for themselves.

The common area at Selva El Javali at night

After two wonderful weeks in Selva El Jabali, our Mexican visas were about to run out and we had to make our escape to Belize. But we’ll be back, one day. And then we’ll visit our new friends in their own homes in their own corner of the jungle. Hopefully without the thundering screams of an airplane overhead. We won’t fly in then, we’ll drive. I promise.

Author’s note: Since the time of writing, it seems that Selva El Javali has closed its doors and is now run by a different person under a different name. Thomás and most other people we’ve known from there have since moved out and now live in other places in Tulum. The land is no longer for sale and all of our friends are looking for new opportunities. It seems the Riviera Maya is baring its ugly commercial fangs much faster than feared.