You are at:Home»Travel and Travelers»Friends, Dumpsters, and Burritos in Oceanside 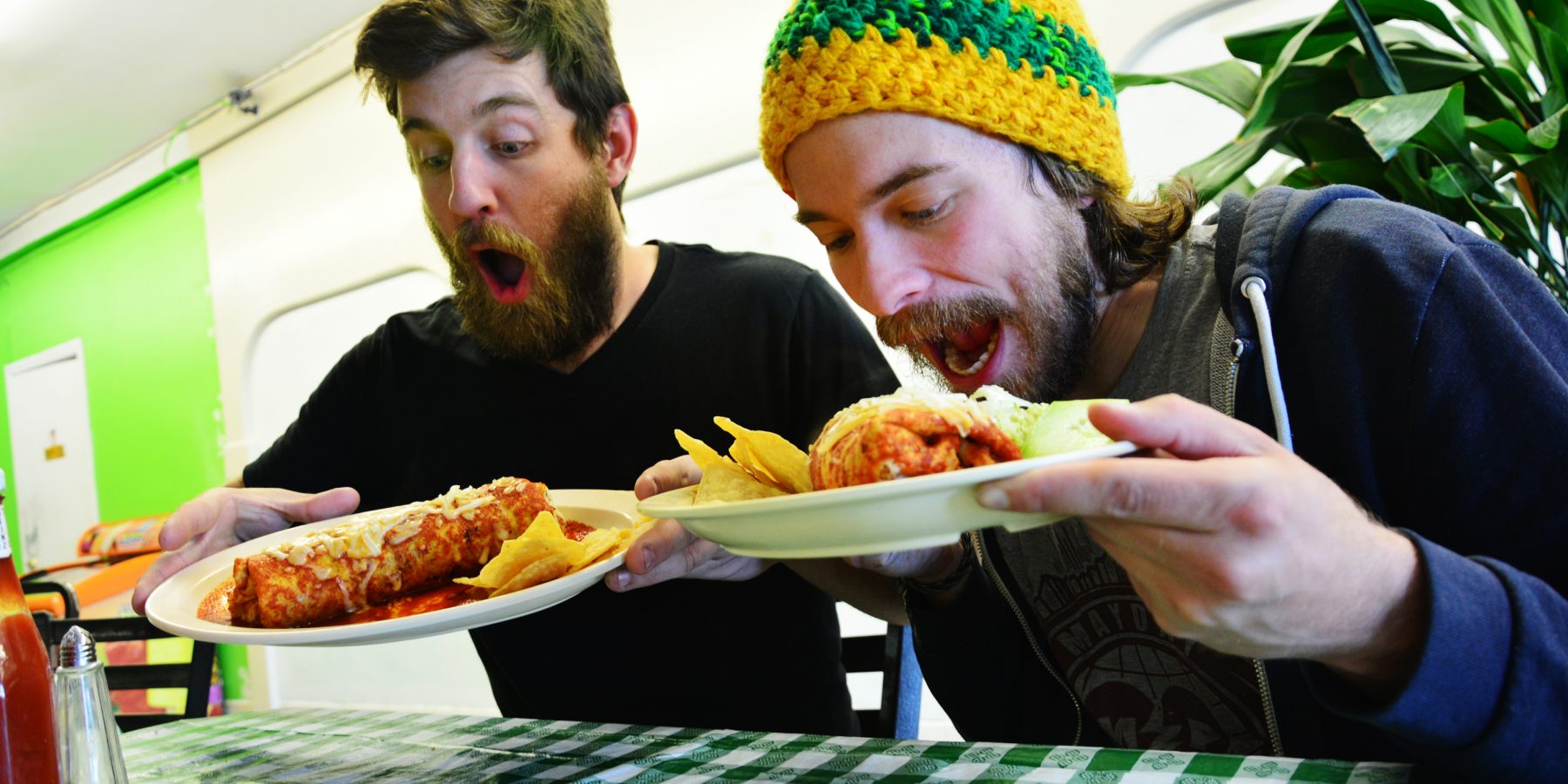 Friends, Dumpsters, and Burritos in Oceanside

Connecting with other people is part of our DNA, but creating and maintaining friendships is tough while living on the move. All the more important are the genuine and heartfelt connections we do create along the way. Here’s a tale of burritos, dumpsters, and the wonder of making friends.

We pull into the parking lot, a small backyard with cracking concrete behind the store. It’s hot, the ground reflects the heat and stores it between the brick wall on the one side of the lot and the house on the other. A typical restaurant yard: a backdoor leading into the kitchen area, a dumpster squeezed into a corner that looks like a greedy cookie monster trying to eat more than what fits in its big, rectangular mouth, leaving torn pieces of garbage on the ground next to it. The backdoor opens, it’s feeding time. A small middle-aged Latino man carrying a huge white bag emerges, the bag almost as big as he is, the dumpster looking hungry.

I wouldn’t be surprised if it’d roll towards the man on its small metal wheels, squeaking and all, and swallow the poor guy along with the bag. But it’s a well-behaved dumpster, it allows the man to open its hungry mouth, feed it the giant bag, and close the big metal lid again. The brave man walks back inside through the door, the scene is over and the dumpster satisfied.

We get out of the cars and walk across the lot towards the front of the restaurant. It’s more a diner than a restaurant, one of these Mexican take-out places we’ve seen everywhere in California, plastic chairs, plastic tables, cheap, but it has magic to it. There’s life in all of this, even the plastic chairs, there’s music playing and Spanish words being yelled back and forth, all in a rhythm that makes me want to cross the border right now and forget the Western world forever.

Everybody’s making their order, a California burrito is what I have to eat here, I’m told, and this is the best place around. Okay, I think, a California burrito it is. Not Mexican at all really, more like the obese American version of a burrito. Take some deliciously greasy beef, add Guacamole, and put a nice spicy salsa on it all. Sounds very Mexican, still, but here’s the trick: to add that American twist, the California burrito has fries stuffed into the tortilla. It’s essentially the definition of fusion cuisine, only without the classiness and with more grease.

We sit outside in the sun, choosing a specific table that’s not covered by an umbrella. It’s winter and the sun is sweet and nice shining on us, its warmth feels good, it slow-cooks me rather than roasting like it probably would in summer. I like being slow-cooked. It’s Emma and me, our friend Phil visiting from Germany over Christmas (yes it’s Christmas, but it’s weird because of the sun and the warmth and it doesn’t really feel like Christmas at all), and Robbie and Brian, the people who brought us here in the first place.

We’ve known Robbie for a while. No, we’ve known of him I should say, because although we knew he was kind of a big shot in the VW community and a traveler as well, it took us until now to meet him in person. He owns a bus called Buddy, and has spent the past six months on his own road trip across the country. We tried to meet up several times but never could manage to do it, every time we were close by going in different directions, but too far apart to afford a detour or to wait for one another. He even stayed at Emma’s parent’s house on his trip, enjoying lush summer days sipping cold beer in the hot tub, while we bathed in icy glacier-fed rivers in Alaska. Different trajectories, until now.

Now we’re here. Southern California, the pinnacle of the Golden State, where there are almost as many people as grains of sand on the beaches they walk on. Beaches where people swim and surf, while strange men and women with metal detectors walk up and down the tidal zones, searching for that lost Rolex or the nugget of gold that an unnamed pirate hid here two centuries ago. Beautiful people wearing minimal clothing showing off their tan while flying go-karts (yes, that’s a thing) roar overhead. Amid all this, we’re eating the best burrito with fries in it, fast food in Mexican disguise, an American flag inside a piñata. While we meet this guy we’ve known of, but not yet known, for so long.

Robbie taking us for a ride in the Pattywaggon. Whew, bugs are fast!

In an instant, Robbie transitioned from a hypothetical, virtual person to a real one, with speech and hair and jokes and personality. This is still a very fresh and new development, yet there’s this click, this sense of pieces interlocking, this satisfaction of something snapping into place that’s been well-treated with oil and brushed and cleaned nicely. We just talk. And he just talks. And there’s nothing special about it, but somehow there’s this thing we all feel and it works, we work well together, we’ve made a friend. And there’s Brian, Robbie’s best friend, and we later meet Brian’s girlfriend Chloe, and we hang out again a day later and the day after that and so on. And we’re just there and talk and drink and sing silly songs with dirty limericks and it just works.

Mountains and deserts are great, but it’s people that really matter

Emma and Phil and I end up leaving over the Christmas holidays; we venture into the more empty places of California, trajecting Joshua Tree and Death Valley. We love the desert and the mountains with snowy peaks on top, funny Joshua trees looking all peaceful and strange in the sunset over red, rocky hills. But we’re coming back into town, because we met these people and we want to spend more time with them.

There are places, wonderful mountain peaks we can climb and be exhausted after it and there’s this view down into the valley with clouds wrapping beautifully around more mountains in the distance. There are Joshua trees sticking out their poky limbs into the sky, like feelers searching for moisture in the air, for a drop of rain that will or will not eventually fall onto them. It’s an awe-inspiring sight, but it’s just that.

A pretty sweet boulder to sit on, don’t you think?

I sit on the top of a boulder and look down into the valley full of Joshua trees, and I listen to them. I listen to the song of the wind whirling around my boulder and I hear the trees and the rocks speak to me. But the boulder and the trees and their songs are just me in a way, all the thoughts that I can find up here are my own. People, on the other hand, they teach me and I get new ideas and this genetic desire to socialize that is wired into me is satisfied.

For friends, I’ll take the dumpster monster any day

We’ve made friends and it feels good. A trip like this, it’s about the people we meet. We travel and we are allowed into the lives of people and that’s the wonderful thing. Wherever it is, a glorious mountain town, a steaming metropolis drowning in smog, it’s people that make us love or hate a place. There might be dumpster monsters behind greasy fast food restaurants, but I’ll take them any day for the friends we make along the way, I’ll leave the boulder peaks and poky trees alone for a while for the Robbies and Brians and Chloes we meet. Oh, and the burritos are really good as well, so there’s that too.