You are at:Home»Travel and Travelers»1000 Miles of Baja California 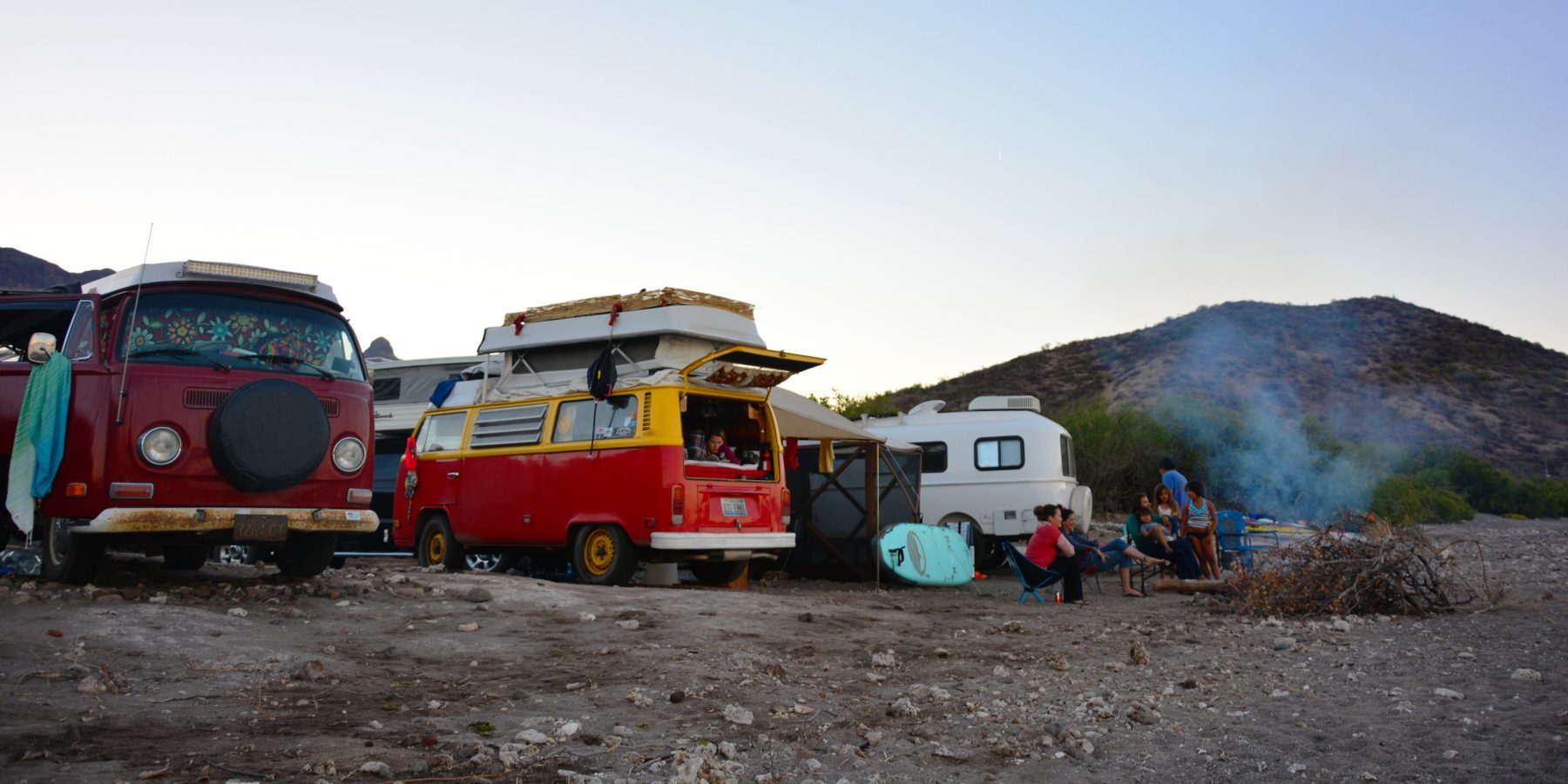 The Baja 1000 is a legendary race down the Baja California peninsula, from Ensenada in the north to La Paz in the south. We’re not good at racing, so we opted for the slow lane. During the trip, we learned about Mexico and overlanding in a foreign country. We also met some legendary travel mates.

We’re driving down a major thoroughfare in the city center. The traffic is dense, but we’re still moving. Suddenly the car in front of us breaks abruptly and comes to an almost complete stop. I slam the brakes and get Big Emma to stop on time. What the hell?!
All the cars in the other lanes have slowed down as well, I now realize. It takes me a second to understand why, but then I see car after car rumble over a blurb of concrete placed across the road. A speed bump, hidden under a cover of dirt and dust. One of those that go really hard on your car’s suspension, and your spine, if you don’t see them in time. Suddenly I’m glad for the cars congesting the road in front of me. Had I been alone, I would have probably run Big Emma right over it.

We’re driving through Ensenada, in Baja California, Mexico. It’s our second day south of the US border. Or our first one, depending if you count the day we crossed the border or the date that is stamped into our passports. Yesterday was a holiday in Mexico, and on holidays, even the immigration offices are closed. Today, we spent our morning waiting in line at the port authority in Ensenada to get a visa. It doesn’t seem like anybody would have minded if we hadn’t done it.
Speed bumps and the Mexican immigration system are only two of the things that feel strange and new to us. The streets are more ridden with potholes than north of the border, the cars are a little older, and the people a little livelier. The fish tacos are phenomenal and everything is louder and more colorful. But there are also many familiar sights. American stores like Walmart, OfficeDepot, and Burger King. California license plates en masse (while we rarely ever saw cars with Mexican plates in the States).
This is Baja California, a strange mix of Mexico and US influence. Baja is dressed up like Mexico, and deep inside it has its original Mexican identity. But in between, everything is a little less Mexico than it should be. Mexico Light, like the light beer they drink everywhere around here.

Baja Emptiness in its most beautiful form

We decide to leave Ensenada behind, to drive south, in search for a more Mexican Mexico. For the first few miles out of town, the roadside is still populated with houses and food stalls. Then Baja opens up and reveals its true virtue to us: emptiness. The road winds around majestic-looking ragged mountains and down again into vast valleys full of boulders and cacti, but no people. No other place since Northern Canada has been so empty.
We camp on lonely beaches and down unnamed dirt roads for the next few days. Many spots are ridden with trash and animal remains (once we find a dolphin skeleton), telling of others that came here before us. But we’re almost always alone. We spend a few peaceful days, but we’re still green behind our Mexican ears. The word “banditos” still rings in our heads, implanted there by so many back home, worried for our safety.

Our luck is changing

We get lonely. We have had neither meaningful contact with locals, nor have we met any other travelers. But our luck is about to change. As we roll into Guerrero Negro, we see a marigold VW Bus parked at a taco store. “Bus!”, Emma and I both exclaim and point. We haven’t seen many buses in Baja yet, despite the fact that Mexico should be the Mecca of old VWs.

At once we pull over and park Big Emma next to this shining beacon of companionship. A man jumps out to greet us. His name is Andrew, he is a Canadian photographer and author. We get talking, and after a few tacos and an afternoon beer, we decide to join forces and meet up with friends of his at a campground further south that night.
This spontaneous stop by the roadside turns out to one of the major turning points of our time in Baja, maybe the defining moment for the northern half of the peninsula. Through Andrew, we meet a whole group of other travelers, including Jason, Angela, and Bode of Bodes.Well, legends of Panamerican VW travel. They took five years to drive their bus down to Argentina and back up. Bode, their son, was three when they started and a world traveler by the time he turned eight.
But Bode isn’t the only child living the road life that we meet these days. Andrew’s friends that we drive to meet that first night are Dan, Marlene, and their three kids. For almost a decade they have been living on the move, raising their family on the road. Both families seem like shining examples of alternative concepts of life, upbringing, and education to us.

Camping with our newfound friends on the beach in Bahia de Conceptión.

We spend two weeks camping with them, hopping from beach to beach around Bahia de Concepción, a collection of paradisiacal bays on the Sea-of-Cortez-side of the peninsula. It’s good times, relaxed days and bonfire evenings. 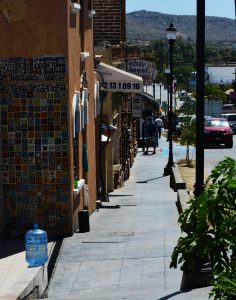 A straight sidewalk in Mexico, a sure sign you’ve found a tourist destination!

But there’s something missing. As cultural travelers, we are direly missing the contact to locals. Nearly a month into Mexico, almost all of our conversations are still limited to the supermarket chatter or fending off vendors on the beach. To some degree, the reason for this might be our own shyness. A new culture, a new language, suddenly it’s a little harder to make new friends than it was north of the border.

But another reason is Baja itself. Gringos are simply very present around here. To whichever town we go, other gringos are already there. Todos Santos is one of the prettiest places we’ve been to on Baja. Once a small and picturesque village on the Pacific side of the southern end of the peninsula, it has long been overrun by Americans buying up land and erecting mansions. It’s still pretty and has retained its small-town charm, but walking through the streets, it almost doesn’t feel like Mexico.
Although we enjoy southern Baja and it’s stunning lonely beaches to its fullest, this rings in our heads again and again as we make the loop around Baja’s southern tip, crisscrossing through La Paz half a dozen times. We continue to meet new friends and reconnect with old ones, but still, where was the Mexico we had been expecting?

It feels like I’m in a theme park, a Mexico-themed Disneyland. It’s all built to look like Mexico, the people working in the shops and taco stands are Mexican, but everybody else isn’t. This is not necessarily a bad thing. This rather soft cultural change greatly helped us to ease into Latin America. For short-term overlanders, Baja is an amazing place to experience Mexico “the easy way”. While it can be helpful to know Spanish, it is not a dire necessity like in other parts of the country. Westerners will still find amenities they know from home here, including familiar stores, foods, and most of all: fellow Westerners.
For us, Baja was a great time with great people. But it was also Mexico Light, watered down like the light beer that is so popular here. We’re glad to have made it across the gap onto mainland Mexico. And from now on, we’re drinking Tequila.
Share. Twitter Facebook Google+ Pinterest LinkedIn Tumblr Email