You are at:Home»Vanlife»Gender Roles in Vanlife

Vanlife is a popular form of alternative living. And yet, more often than not, vanlifers appear to take on rather classic gender roles. What is the typical gender-role division in vanlife, and why is it so predictable?

More than once, I have found myself in a group with other vanlifers, all in the form of heterosexual couples. More than once, the scenario looked something like this:

After talking a bit, we tend to move over to one of our overlanding vehicles. The men move to the back of the car (or the front, if it isn’t a bus), open the engine compartment, poke around, talk about engine stuff. What type of oil are you running? How’s that battery setup working for you? Did you ever have problems with your alternator? In the meantime, with the women, we crowd the door of the vehicle to get a good look at its interior. Where do you store stuff? How does your sink work? While the men spend their time fiddling with the mechanics, the women care about how everything inside is organized.

This reflects a pretty traditional division of roles and interests…so what’s up with that?

The gender-role divide in the vanlife world

This scene represents a division into the typical gender roles that Western culture has taught us to fill. Although vanlife offers a fresh start (career or otherwise) for many of its members, this does not seem to influence the gender roles that we vanlifers choose for ourselves.

Over and over again, we have seen a typical, rather traditional division of gender roles among both ourselves and other vanlifers we have met on our journey so far.

This reoccurring gender division includes a number of specific areas and household tasks. To start with a basic example, let’s take a look at drivers.

Sven is the driver of our travel team; I am the navigator. This is because I have a slight fear of driving (driving in general, not driving Big Emma), which has developed over years of negligent practice. Even though I know I should drive, I do not. I’m the better navigator, Sven actually likes driving, and he is good at it. It turned out to be a pretty solid deal.

We are not the only vanlife couple who does it this way. In fact, most couples that we’ve met, including vanlifers like The Bus and Us, Hasta Alaska, Irie to Aurora, Mali.mish, Wandxr Bus, Julius the Orange Bus, Fritzy the Bus, Summer of Seventyfive, and HV Adventure all put their male half behind the wheel. Often, as in our case, the female half is capable of driving but is just not their everyday driver. 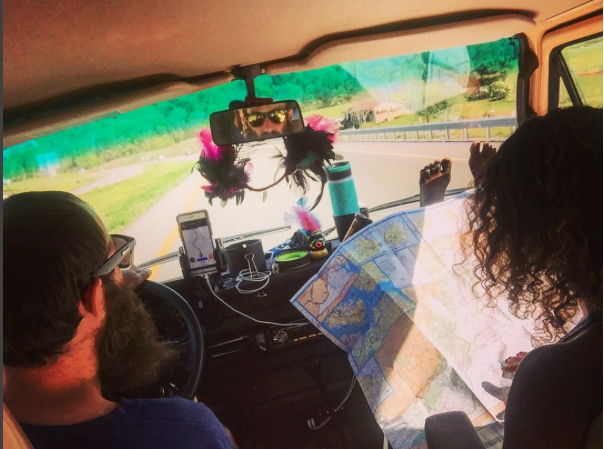 Other stark examples of this include work and mechanics. Although Sven and I usually work together on writing projects, many of the men we have met are the breadwinners of their duo. Dustin from Irie to Aurora works remotely as a project analyst for a construction contractor, Dan from Mali.mish is a software developer, and our friend Klim has his own company that designs and builds quality user-interfaces online.

In all of these cases, the women take on occasional jobs as well; however, they are not the ones creating the major – and stable – income for the traveling fund. In the case of Mali.mish, Marleen spends most days homeschooling their three children while her husband is confined to his laptop. 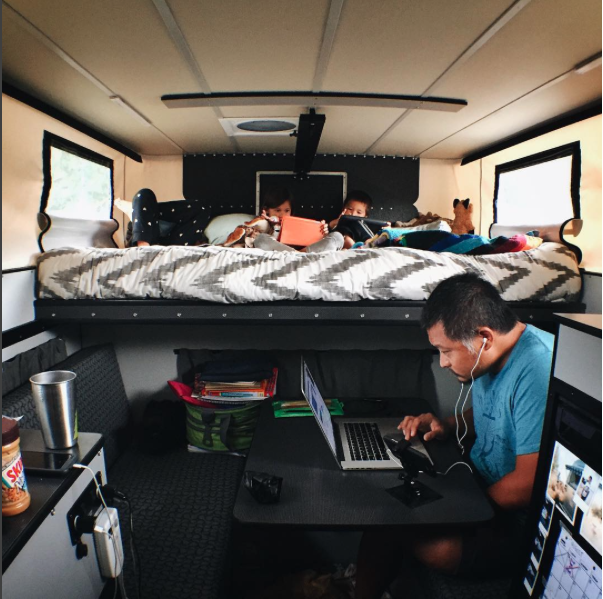 Dan from Mali.mish hard at work in their truck camper. Photo by Mali.mish.

And let’s not forget about the most obvious gender-division spectrum: Mechanics. A part of any vanlifer’s burden is the need to keep their vehicle in awesomely running order. You can’t afford to get stuck somewhere you weren’t planning to stay for long.

There are two options for vanlifers: have the money to take your car to a shop, or learn how to do it yourself. Many VW-vanlifers opt for the latter option (and many non-VW-vanlifers are traveling in more modern cars that don’t need fixing quite so often). As you might have guessed, you can usually find the guys underneath the car.

The girls, on the other hand, tend to range between cooking meals for a hungry mechanic, figuring out which tools to hand over, or just plain, “Oh, I don’t even know what he’s working on down there.” 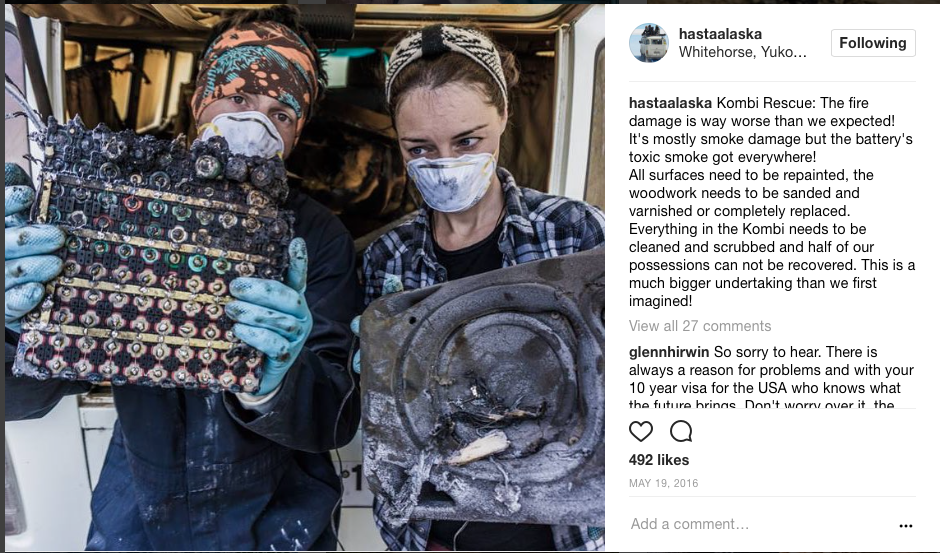 Ben and Leah working to get Co’Pito back into tip-top shape after some fire damage. Photo by Hasta Alaska.

We are, for the most part, no exception to this: Sven is the mastermind behind fixing Big Emma. I help. It is no question who will be leading the campaign when there is something to be fixed. Sven not only has the upper hand in physical strength, he also has an engineering background and a mind that is better at putting 3D mechanical pieces together than mine.

However, I participate more in mechanics than most other female vanlifers we have met. I always know what Sven is working on. I am not the leader of our mechanical team, but I know what he is talking about, or will let him explain it to me until I do. We knew before we left that fixing Big Emma would be a two-person job.

My knowledge base is important if only to help Sven think of a creative solution to a problem we just can’t solve. If it is something larger (aka more urgent) – major repairs like CV-joints, sudden engine-cutouts, or searching for lost lug nuts – it is always a team effort. I have learned exponentially about mechanics since before we began. Admittedly, however, this has been out of necessity; I do not want to bother myself with mechanics unless I have to, and there is no way in hell I’m going to look through our VW books for fun. 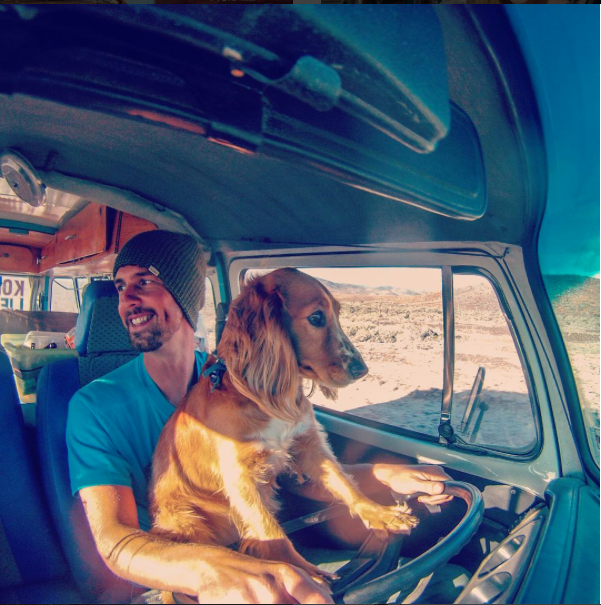 Wait, I must have reported that wrong. Actually, Alaska seems to be the driver of Hasta Alaska. Win for the girls! (Photo by Hasta Alaska).

This gender divide, more than any other, is almost guaranteed; we have met very few exceptions to this trend.

So where have we noticed exceptions to this classic gender divide? Three activities tend to be an either/or kind of deal or divided between couples: cooking, language learning, and making media.

For example, our friend Alex is the mastermind behind their media making, and Klim shoots and edits all of the photos that she arranges online. Emily from Where’s My Office Now is also the main media-maker of their team. On the other hand, Venca of HV Adventure and Ben from Hasta Alaska both take the mother load of media-making tasks upon themselves. Producing media seems to be something that both genders feel responsible for. 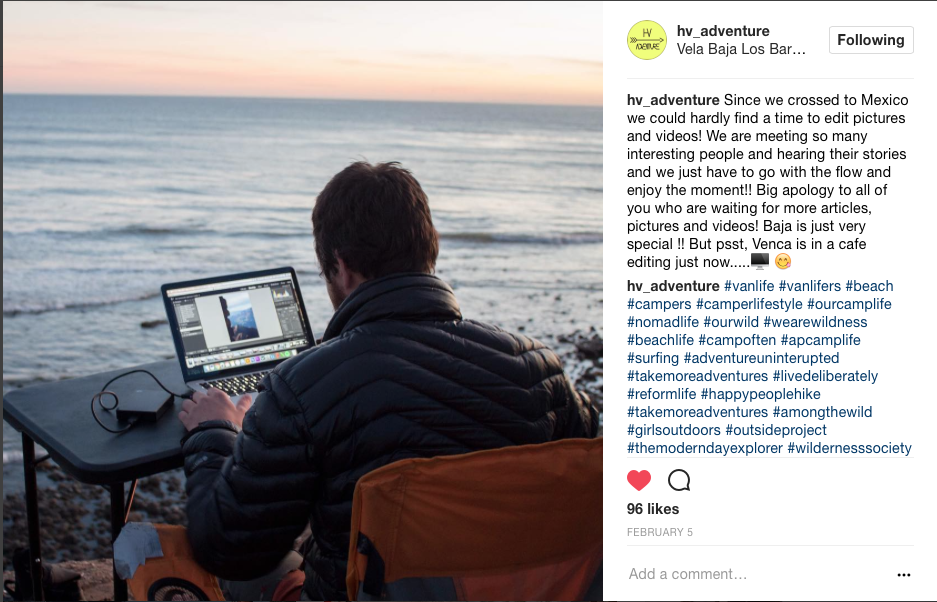 There are many counter examples to the trends I have listed above; by no means do all vanlifers divide activities up like this (and by no means are there no exceptions to the habits I have mentioned). Neither Ryan nor Hailey works on their car (they take it to a mechanic’s) and they work together on money-generating projects. Klim and Alex divide driving time up so that each drives for one hour before they switch. Fredthebft is driven by a woman. Our friends Bruno and Maiden are about to begin their travels from Mexico to Panama in a Mexican VW bus; while Bruno spends his days working on their Kombi, Maiden makes the dough by working as a muralist.

As far as mechanics go, the exceptions we have encountered include Leah from Hasta Alaska, who can often be found with her hands as greasy as Ben’s; and Geneva from It’s Not a Slow Car It’s a Fast House, who grew up in a family of VW mechanics. Our friend Alex also recently completed her first solo tire change. 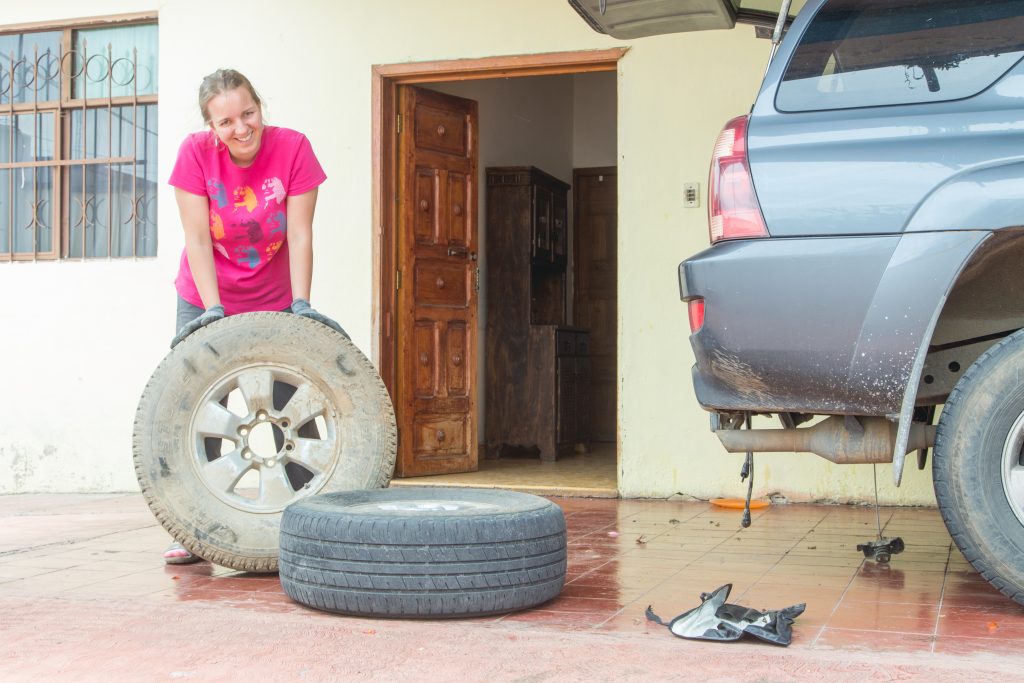 Although these are noteworthy deviations from the typical gender division, it can still be said that they are exceptions. Most vanlifers we have met do follow the gender patterns I have explained. So I ask again: Why?

We all come from a cultural background (whichever that may be) outside of vanlife, one that features gender roles that society has been both adhering to and questioning for decades (and longer). Have we simply adopted these into the vanlife culture as well? When were vanlife gender roles invented? Did we decide them for ourselves? When was the day where we women sat down and said, Hey partner, I would like to organize our cabinets – you’re fine with dealing with the engine stuff, right?

Of course, this didn’t happen. Rather, these patterns are the result of an unconscious process that has translated from our former lives, usually in Western society, to our new nomadic lives on the edge of it.

Although Mali.mish travel with their three children (two girls, one boy), only their son Luka is interested in helping Dan change the tire. Photo by Mali.mish.

Women tend to crowd around the door of a vehicle to examine the inside because it is what interests them; the same way I just can’t bring myself to like VW Bus mechanics for the heck of it. These gender roles have developed in the same fashion; an interest in specific aspects of vanlife. Why aren’t there more people breaking this typical division? It is not because we don’t feel like we have the opportunity to fill these roles; it is simply because we don’t want to.

The next question is why aren’t we interested in the activities that are typically ascribed to the other gender? Do these interests simply come from the cultures we were born into? Is it simply that our dads did not take us outside to play with engines (in that case, Geneva – a daughter of a VW mechanic household – was pretty lucky), and neither did our friends when we were growing up? That doesn’t explain things like the driving division, but could come to the root of many of the other aspects of this issue. The answer may be found in the complex subject of broader gender studies.

On the other hand, maybe there is a different reason. One of the things people find so attractive about vanlife is the simplicity it (seems) to bring to life. The number of tasks in the day becomes easy to count on one hand, and often involves working in tandem. Maybe these patterns represent the typical gender roles because it makes a lot of sense for many couples to divide their attention like this; maybe vanlife offers a prime setting for this type of role-playing. But still, we can’t help but notice the fact that we haven’t met a single couple where the woman was solely responsible for mechanics.

As a woman in the vanlife community, what does this mean for me? Does it mean I should suck it up, get behind the wheel, and memorize our wrench kit? Should I feel bad that I am not a stunning example of non-typical gender roles in vanlife?

No. In the end, I cannot force myself to be interested in alternators or electric ignitions. But I can make sure I am there when my travel companions need me. For GoBigEmma, vanlife is a two-person job.

Thanks to everyone who participated in our mini-Instagram survey to gather the data for this post and to the wonderful photographers who allowed me to use their photos!