You are at:Home»Vanlife»Pay it Forward – Giving and Sharing in the Vanlife Community 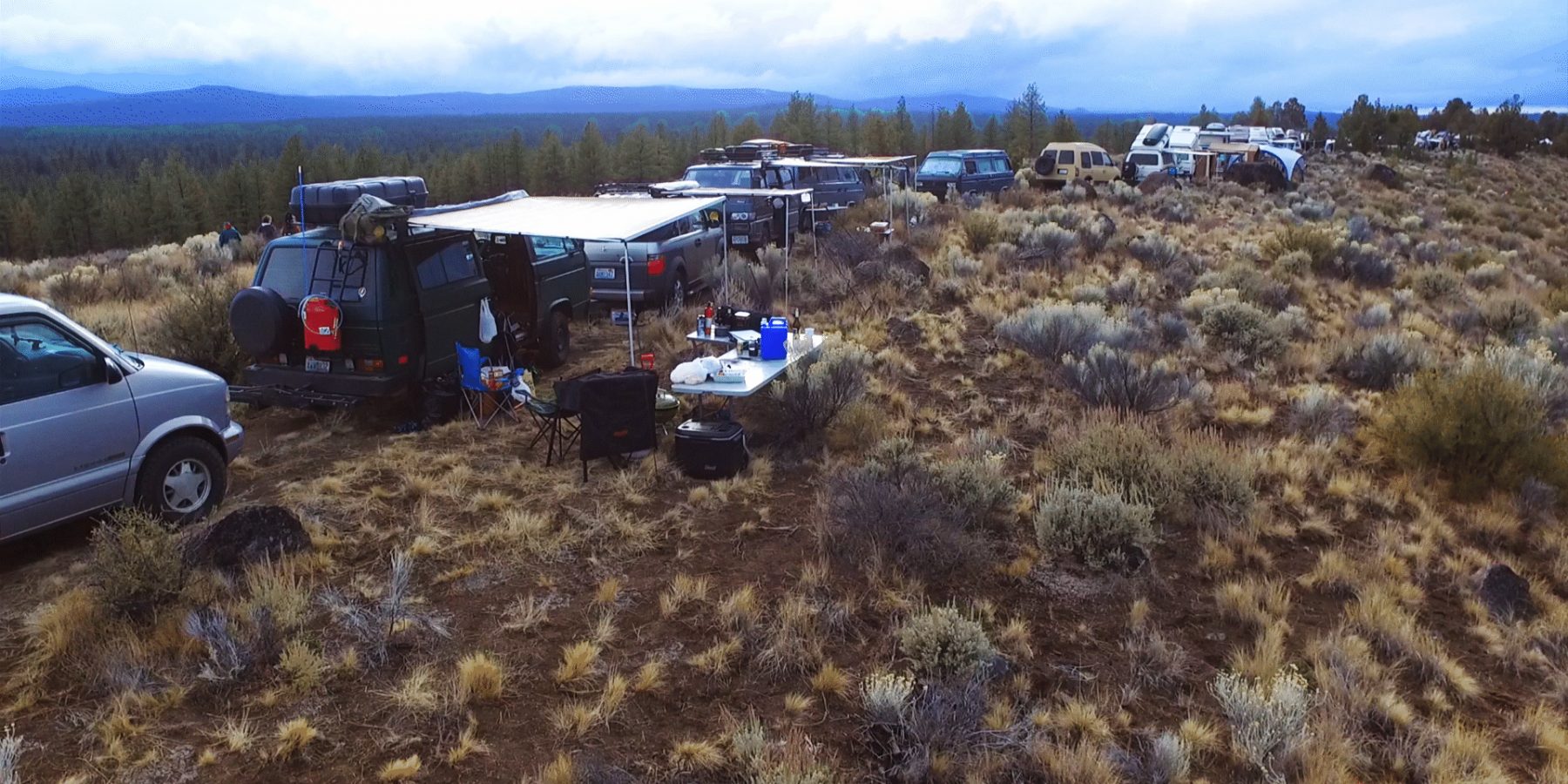 Pay it Forward – Giving and Sharing in the Vanlife Community

We were fortunate enough to attend a bus meetup in Bend, Oregon two weekends ago. Descend on Bend, as it is rightfully named, is a gathering of people living in their buses and those who like to take them out for weekend strolls, pretty much any vehicle enthusiast who is up for a weekend of bonfires, camping, drinking together and trading stories.

Not everyone was in a VW, but they were very much the majority. This particular meetup mostly consisted of 80’s Vanagons, although every once and a while you could spot a Bay Window Bus like Big Emma. While other bus meetups focus on the cars themselves, Descend was definitely focused on the camping and vanlife side of things. Nomads and weekenders, wanderers and PNWerners alike, everybody was up for a big bus party.

We spent three days sitting around huge campfires. One guy would come along and hand out cans of Coors. We meandered through the maze of vehicles, admiring each one and talking to its inhabitants, trading stories. When we ran out of beer (it often took a very long time to get from one end of camp to the next this way, more than enough time to finish whatever you were drinking when you initially left your van), our current host would offer us another one. Even if we hadn’t run out yet, one would be offered. Or snacks, or a PBJ. Whatever it is people have to offer. A reoccurring theme of the weekend was giving and sharing whatever was currently on hand.

We feel like this generally when we are camping with people. Even if they are complete strangers, we give things we can spare if they are needed or desired. Books, tape, extra tools, food and beer, a cup of coffee. At home, this might have been strange. I would not have found it weird at Descend if someone who is over at my Bus for a visit sees me open the fridge and would say “Oh you have whatevers! I love those! May I have one?” And of course, I would give them some. If a group was sharing a smoke and a stranger came to the edge of the group asking for a drag, this would be completely acceptable. At home, a stranger wanting something not explicitly offered from my fridge would have been weird. You just don’t do that.

But it is an unspoken thing among vanlifers that things are different now. If I can, I share. It is an innate element, the spirit of the situation. Descend was simply an extreme example of this.

But why is this? What creates this mutually understood theme? It is simply the fact that you are around other people who share, and so you share, too? But why are these people so into sharing in the first place? The “share” button doesn’t automatically come with the van.

In general, we living in vans tend to have less possessions than before, back when we were living in apartments and houses that were considerably bigger. We just don’t have room for a lot of stuff, and many who live in their vehicles are specifically attracted to the simplicity that they associate with this. And we definitely don’t have room for things we do not need. We have no extra plates, no Xbox, no old laptop laying around, no 10 pairs of shoes, no luxury items like dishwashers or perfume, no extra books. Things that aren’t useful get kicked out of the Bus very quickly. Nothing superfluous lasts.

Is it this simplicity that inspires sharing with others? Were we just more protective of our possessions back when we had so many of them? No, I don’t think so. After all, we are very, very protective of the possession we obsess about the most – our Bus. No, having less just makes it more clear what is necessary and what I can spare. It is easier to identify what I can share with others. Maybe this is what makes us so willing to do so.

So, it is just part of the spirit of events like Descend? It sure feels like it, when someone brings enough chicken to feed 200 people and throws it on the grill, while a box of wine is passed around the bonfire to land in the hands of 20 people you do not actually know. It is so much the spirit of the event that it is contagious.

We try to pay it forward. We don’t have a lot of money. But we do carry extra gas on the top of our Bus. If you’re pulled over on the side of the road and need some, we are more than glad to donate it. We keep a lot of tools in our bus. It might not be the right one, but we can definitely pull over and take a look for a vehicle in need. Giving and sharing is not just the spirit of Descend, but of our general vanlife experience.

So, who wants a beer?

Descend on Bend was awesome, so check out this cool video by our awesome videographer friends, Totem Ent.: