You are at:Home»Travel and Travelers»We Don’t Speed: Slow Travel is the Best Travel 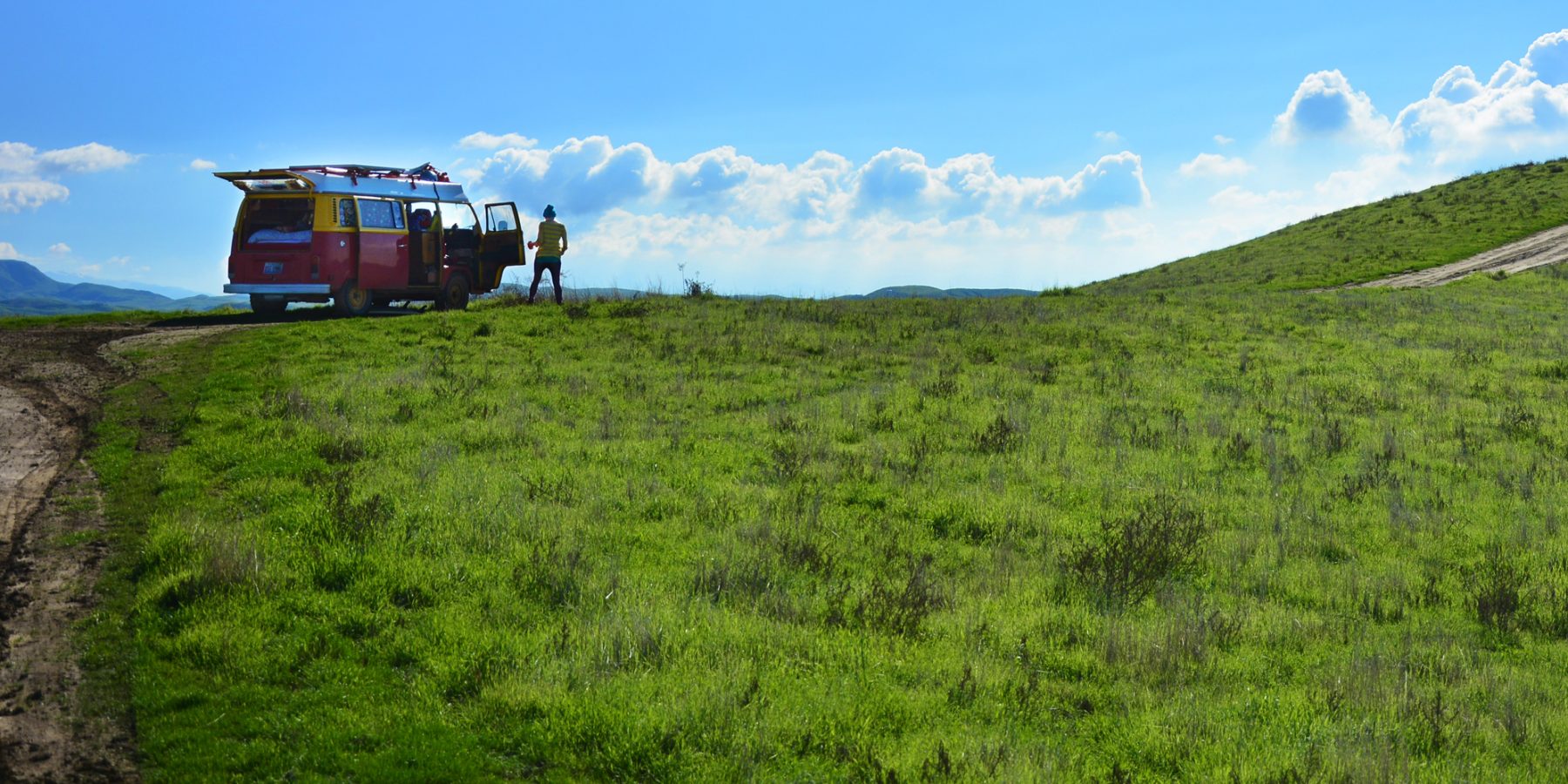 We Don’t Speed: Slow Travel is the Best Travel

A defining characteristic of our trip is the slow pace we have chosen to get from Alaska to Argentina. Although many overlanders finish the trip in much shorter amounts of time, we prefer to take it slow and enjoy the ride.

Big Emma is a VW Bus. There are many characteristics that one can immediately associate with that. Winning points for car-cuteness, breaking down and doing necessary repairs more often than those traveling in modern vehicles, that vintage VW charm. However, if you ask anyone traveling behind us on an uphill, two-lane highway, there is one characteristic of old VWs that stands out among the rest: the fact that we are very slow in comparison to other cars.

This is especially true for Big Emma. Some buses can go faster, especially if they aren’t traveling uphill, but she is laden with equipment, and regularly carries two or more people. And most importantly: we don’t like driving fast. We aren’t trying to win any races. And the slower we are, the more careful we can be with our vehicle, which is currently the most important thing we own. Why take a curve at 55, when you can take it at 35 and feel much safer? In Big Emma, much more so than in modern cars, you feel every rock, every bump underneath your tires, you are much more connected to the road. We are also shaped like a giant loaf of bread. So our motto: the slower, the better!

This is a mindset we generally adhere to, not just on curvy mountain highways. A lesson we have learned on all of our previous travels is that you can never enjoy a place long enough. I recently began reading Don’t Go There. It’s Not Safe. You’ll Die. And Other more Rational Advice for Overlanding Mexico and Central America, an excellent read for Panamerican travelers, written by Panamerican travelers Life Remotely. They say it well: “There is never enough time. Never. Even if you give yourself a year to travel, you will want more”. Like many of the words in the book, this rings the bells of truth in my ears. We set out on this journey with the intention of enjoying the places we go without being in a big hurry.

The average Panamerican overlander takes about two years to complete the journey from Alaska to Argentina. Up in Alaska, we met up with two Argentinian couples, Kombi pal Norte and Amerikombiando, who took 2 and 2 1/2 years to complete their journeys. The crew from Life Remotely also took about 8 months to complete the first half of their trip (USA to Panama), starting from Seattle, WA and spending only 28 days in the USA in 2011.

However, many people take a much shorter time to do the trip, and some travel for considerably longer. The Bus and Us, who did the trip in 2015, took about a year to get from Seattle to Ushuaia (born and raised in Anchorage, Alaska, they decided to start their trip in the Lower 48). One of the examples we find the most astounding is Mototraverse, a couple that we met on motorcycles in Watson Lake, Canada last July. They are already in Patagonia, and will have completed the trip in around 9 months or so. They, too, are not quite done. They recently sold one of their trusty travel steeds to travel to Antartica, where they plan to end their journey. An example on the other end of the timetable-scale is Hasta Alaska, who started in Chile and took nearly four years to get to Alaska, largely due to multiple engine rebuilds in Central America.

The duration of a trip on this scale involves many factors for most travelers, not in the least the type of ride. Most of the examples I have given above are doing it in VWs, but Mototraverse is on motorcycles, and Life Remotely was in a 4Runner (both of them camped in tents, or stayed in the occasional hostel, as their vehicles were not outfitted for sleeping). And even among the VW travelers, a bus never equals a bus. The Bus and Us have a 1975 Westy with a Subaru engine conversion (this means that they have a much more powerful and reliable engine than those traveling with originals like ours), and Ben from Hasta Alaska had many more engine problems than most of us ever hope to see. Other factors often include the traveler’s budget, if they have a job they promised to return to, and how much time they like to spend in one place.

Morning on the coast of Northern California, near Mendocino.

We will need longer than average

Sometimes you just need to take the time to give extra-big friends those extra-big hugs. (Redwood State and National Parks, California)

We seem to be on the far end of this scale, over on the side by Hasta Alaska. Although we plan on the trip taking at least two years, and probably more like three, we do not know what the final timeline will be.

To put things in perspective, we have visited exactly two of the 23 countries on our planned itinerary so far – in the time Mototraverse has nearly completed the trip. Given, these are the two largest countries along the route, and they are places we feel very comfortable in. There may be countries that we decide we would rather zoom through (Belize is very expensive, for example, and Venezuela may be too unstable to visit at all) and countries that we never want to leave, but we will only know this when we get there.

Let’s assume we love everywhere we go. If we say the average visa lets us stay in every country for three months, and we decide to make the most of every visa, we would still have over 5 years of traveling ahead of us. I sincerely don’t think this will happen, but it is within the realm of possibility. Even if we only take a month in every country coming up, we will still be gone for another two years. And that does not include breakdowns that leave us stuck in one spot (also within the realm of possibility). You never know what will happen.

We hope days like this won’t leave us stranded for weeks. This hiccup left us fumbling for a little over an hour near San Luis Obispo, California.

If the budget allows

We also have a budget that allows this: we are dependent on our savings, but also planned on freelancing along the way. We knew we would have to freelance anyways, so we figured doing it for longer to allow for more travel is worth it. And one of the best benefits of slow travel: costs do not go up exponentially. Yes, we make more detours, but the total number of miles we will drive stays more or less the same. Let’s say driving for a year costs 1 unit of food and 1 unit of gas. Driving the same route for two years, therefore, costs you 2 units of food, but stays at 1 unit of gas. In total, the trip will cost more, but the experiences per dollar go up. For those on a strictly fixed budget, traveling for longer may not work; but for those whose budget is flexible or an income is in sight, there is no reason not opt for the slower version.

Time is the most precious commodity

We don’t want the trip to take another 5 years, but we do like traveling slowly. My first backpacking trip through Europe in 2008 took me to nine countries in a single month – an itinerary that any backpacker can tell you is ridiculous. We had to stick to such a strict schedule that we literally couldn’t take a day to relax, and we were utterly exhausted for most of the trip. Being on such a tight timeline makes traveling a lot less fun. And living on the road for multiple years would be impossible if you have no time to just enjoy life and get the boring shit done like any life requires. You need days to do nothing, to be spontaneous, to just hang out. They are a necessity for a healthy mental state. And they give us time to reflect and write about our experiences, for example. But, more importantly, they let us get to know a place better.

Life Remotely said it perfectly: There is never enough time. I want to have the time to stay if I like a place or the people I meet there. I will quite possibly never have the opportunity to “live” in California again, so why not use that opportunity to its full extent? Time is the most precious commodity, which is why we decided, from the start, to go slow and take our time.

And this opportunity offers a lot, especially traveling as a vanlifer. Just take the example of California – where we have spent roughly a third of our trip. We were not limited to the 10 most important stops in the state, but had the freedom to explore however we liked. We drove down Highway 1 (if you only have time to do one thing in California, that should be it), and visited famous parks like Big Sur, Death Valley, Joshua Tree, and the Redwoods. But we have not only traveled along the coast and felt the chilly nights of the deep desert, we have also traveled along the rolling hills of the central valleys, spent time in towns like Bakersfield – where even the locals don’t seem like they want to be – and will still get to explore the many oddities around the Salton Sea.

But we also spent time in the towns of Woodside and Oceanside, simply making and maintaining friendships with locals – something the average traveler does not get lucky enough to do. We don’t just see the highlights in the guidebooks, we get to experience living in San Luis Obispo for a week. Of course, it is nothing like being a resident of a place, but it is also nothing like a tourist on a limited temporal budget. We talk to people, attempt to understand what their lives are like. Feel what is like to simply be in California, and have time to get some work done in between.

And yet, what Life Remotely says still rings true. There is so much in this one single US State that we have not gotten to explore: winter storms prevented us from going to Sequoia National Forest, and snow prevented us from visiting Yosemite, one of the most famous parks in California. We don’t want to leave our new friends behind to cross into Mexico. But we also can’t stay here forever, and the road continues to call. We still have 21 countries to visit.

Morning beauty near Bakersfield, Calfornia. We’ve been told that the landscape is usually brown, but a series of winter storms has brought out that Ireland green.