You are at:Home»Travel and Travelers»Crossing the Line – The First of Many Not-so-Easy Border Crossings 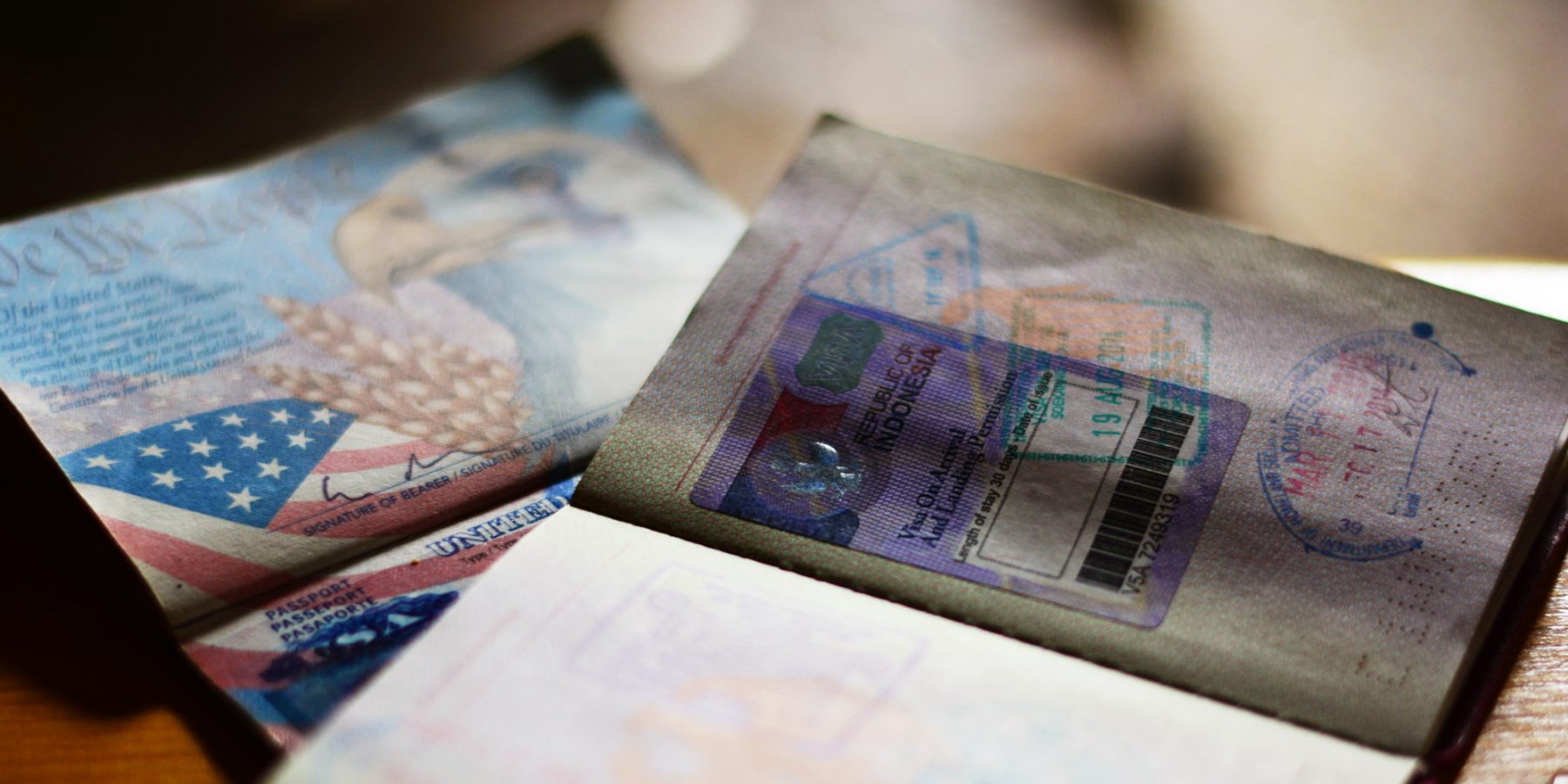 We knew it from the beginning – this might be the toughest border crossing of our journey. Crossing back into mainland USA, they could just turn us away if they decided to. What would we do then? This was no time to make mistakes, we were anxious and weary, still there was nothing left to do but to drive up to the border and try our luck.

Flying into the States as a foreigner, I get my picture and fingerprints taken. The immigration officer asks questions like “What are you going to do in the States?” “What do you do at home? What is your job? Where do you live? Where did you go to college?”. I answer, the conversation is a mix of casual boredom and interrogation tactics. My story seems to have pleased every immigration officer so far, they all went on to stamp my passport, wished me a good day, and off I went. Hello US of A!

So far we’ve crossed the border seven times, all between Canada and the USA

Land borders, on the other hand, are a different thing. Driving to Alaska and back, we crossed the border between Canada and the US many times. Not only is the Last Frontier disconnected from its sibling states, but different parts of the state are also only connected by roads that pass through Canada. Because of this unique feature of the 49th State, we had entered and left the United States a total amount of seven times so far on the trip. All on my first 6-month admission stamp.

Most of the land border crossings were pretty uneventful. We drive up, hand over our passports, have the usual conversation, and are on our way within a few minutes. Sometimes, we arouse the interest of the officers and we get to pull over, have a dog walk through the bus (well, rather jump in, do a 360 degree turn, and jump out again. That’s about how much room there is on the floor of the bus), and talk a little longer.

This border crossing back into the US mainland, however, was different. When I entered the States back in April in Chicago, the border officer gave me a stamp for six months. These six months were up in October. So here we were, exactly a day after my stamp had expired, asking for another six months. Our plan was to drive down the West Coast through Washington, Oregon, California, to explore and to visit friends along the way, as well as get our engine majorly looked at before we crossed to Mexico. Would it work? Or would the border officer doubt our story and believe I intended to work illegally or even settle in the US?

“Please pull over to the side there and step into the office.”

At the checkpoint, the officer on duty skimmed through the pages of our passports, meanwhile asking us the usual questions about our travel plans, our lives. After a few seconds, he looked up and said, “Please pull over to the side there and step into the office.” Of course, it wouldn’t be that easy this time, just as we had suspected.

Border crossing between Canada and Alaska. In the middle of nowhere, but at least it’s an office with a view!

Inside, we got to talk to a different officer – let’s call him officer Bob – explaining our story once more. Yes, we are on the way to Argentina. Yes, we’ve already spent quite some time in the States. No, although it’s possible to drive to Mexico in just a few days, that wouldn’t be enough. How do we finance ourselves? Do we have records of that? We did. When will I return back to Germany? Hard to say, maybe in a year or two? How can he be sure I wasn’t intending to stay in the States? Well, Argentina isn’t in the US, really…

“I’m going to be honest with you,” officer Bob said. “Right now, I’m 50/50 on letting you in. Right now it’s not enough.” I swallowed. What more could I do? We had told him about the trip, we had given him all the documents we had. So we explained again. We are on the trip of a lifetime. Realizing our dream. The United States is a big place, too big to explore in just six months, especially if Alaska is on the itinerary. We couldn’t just zip through, that wasn’t the point, that’s not why we are doing this.

“If you don’t believe us,” Emma said, “we’re writing a blog about our trip. We are going from Alaska to Argentina, it says it all over it!” He looked at us, back and forth, skeptically. “What’s the address of this blog of yours?” officer Bob asked. He wrote it down, then turned away from the desk, hollering, half to us, half to his colleagues, “I guess I’ll be in the back, looking at this Big-Emma-website for a while…”

What if he doesn’t let us in?

And a while it was. We sat down on a row of uncomfortable plastic chairs by a window and waited, while in the “Welcome to the US” video on the TV overhead a bunch of happy comic characters tried in vain to smuggle cheese and bacon into the country. In the 20 minutes or so that officer Bob was gone, the same thoughts kept running through my head, the ones that had haunted us again and again, but that we could never do anything about. What if I don’t get in? What if I have to stay in Canada? We still have to go to Mexico somehow.

We would skip the West Coast and go straight to Baja California, Emma driving the bus, while I would stay behind and eventually taking a flight from Vancouver. At least Emma can enter; being a US citizen, they can’t deny her that. What would that mean for future times when I would try to travel to the US? The question “Have you ever been denied entry to the US?” I would have to answer with “yes”. My casual conversations with the airport immigration officers would become a lot less casual.

Those 20 minutes had stretched to an eternity. Outside the light had faded and night had begun. A good analogy to my current feelings, I thought. While we waited, an African-Canadian family had been refused entry because their youngest child didn’t have a valid travel document. Next to us, Mohammad, a middle-eastern looking twenty-something, had been questioned thoroughly because “you have the most common name in the world, we have to double-check sometimes,” to quote the officer working his case. Despite consistent failure, the comic characters on the TV never got tired of trying their luck with a new block of cheese. My gut feeling could be accurately described as terrible.

First Victory: “I wont turn you around”

Finally, officer Bob came back. He seemed pleased. “Nice website”, he said. “who’s paying you for all that work?” “Nobody,” we answered truthfully. The answer seemed to satisfy him. He said, “Okay, I won’t turn you around, that would be too harsh. What I might do though is limit your time, not give you the full six months.”

…and don’t you trees just migrate without a visa!

A part of me wanted to jump through the room in relief, a different part of me felt like it just got punched in the guts. We would go to the US, no flights to Mexico would be necessary. But how long would he give me? Officer Bob motioned us outside to have a look around the car. Despite the tense situation and the uncomfortable feeling of depending completely on the mood and judgment of this border officer, I relaxed a bit. He seemed like an honest person. From the beginning he had told us what he thought about our case, he had bothered to look at this very blog you are reading right now, he took his time to hear us and didn’t just dismiss our case.

The conversation bounced from typical border topics (“Do you carry any weapons or drugs in the vehicle?”) to more casual things (“Didn’t these vans come with tools back in the day?”) and then back to formal talk. After a few minutes we went back inside. The officer walked around the booth, leaned on his side of the desk and looked over to us. “I’ve thought about it,” he said. Here it is, I thought. The conclusion. How long will I get? “I respect what you are doing. I’m going to give you the full six months.”

After an hour-long ordeal where we had flown from high to low a dozen times over what seemed like an eternity, I just stared at him in disbelief and uttered an astounded “Thank you”. Emma started bouncing up and down a little bit with excitement and then caught herself and tried not to.

“But after that you will have to make a meaningful departure. If you don’t, you will get your visa revoked.” A meaningful departure, that’s border speak for get the hell out of our country and stay away for a while. I believe driving to Argentina will probably qualify as “meaningful”, but we’ll see about that when we get there.

Border crossings will stay with us throughout the trip. In fact, they will become much more common as countries and distances get smaller on our way south. Latin American border crossings might be more chaotic and adventurous, but crossing into the United States this final time has proven to be just as suspenseful. In the end, we’ve made it and we got everything we wanted out of it; and it even made for a story with a happy ending. What more could a traveler wish for?