If I asked you, could you tell me the official language of Belize? Did you know over half the population of Belize is bilingual? How many languages are spoken there? What’s one of the most fascinating parts of this tiny country? It’s language diversity.

We crossed the border to our first Central American country. After completing the border paperwork, we headed down a dirt road to the tiny fishing village of Sarteneja.

As soon as we crossed the border, we were faced with a problem that we hadn’t encountered yet: which language should we use to greet people? Should I use a hearty ¡Hola!, practiced many times with my hard-won Spanish skills? Or was my classic English Hello! more appropriate? What did people expect of me here? 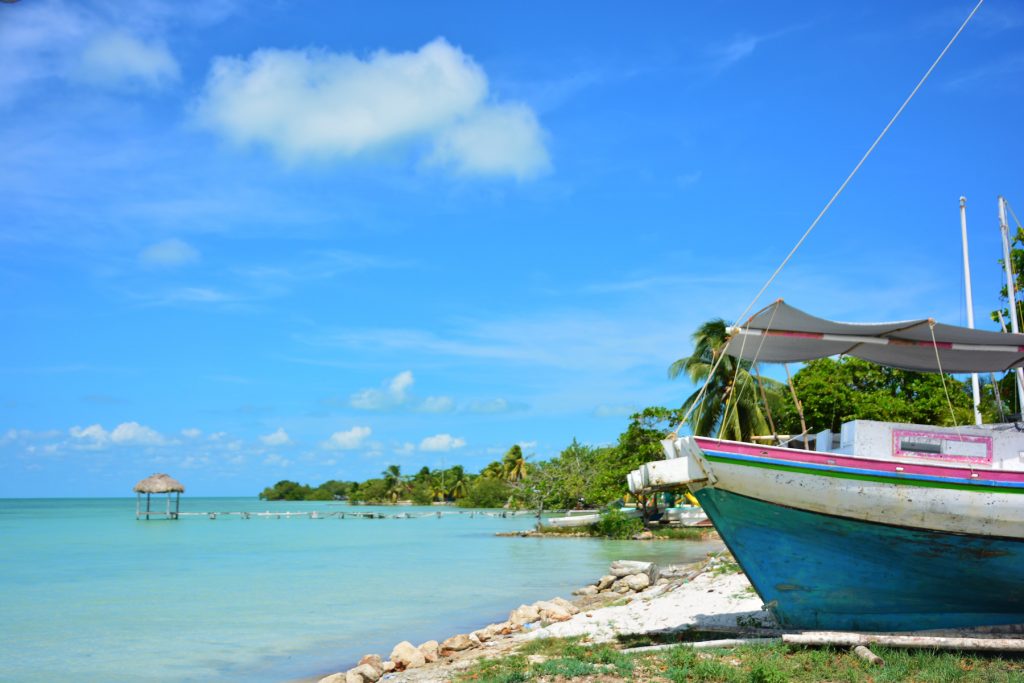 We had heard many things about Belize. Belize is expensive, people kept saying. We had heard this, too: Belize is the only country in Central America where English is the official language. In a weird mix of leftovers from the British Empire – having gained its independence a mere 36 years ago in 1981 – and as part of the Carribean community, signs were almost exclusively in English. We found ourselves on an English island on the mainland of Spanish-speaking Central America.

I continued to puzzle over appropriate greetings as we walked through the tiny, dusty streets of Sarteneja. The dirt roads are decorated with tiny, one- or two-story houses, often painted in fantastic colors. There is a mini-market or two, a few rundown hotels and restaurants that never seem to be open. All of it sits at the water’s edge, waters that look spectacularly Caribbean, turquoise with small fishing boats dancing on the waves, piers of varying decay sticking out into the blue. Most of the people in this tiny town look Mestizo, similar to the Mexicans we have gotten to know, with darker skin and Spanish-speaking. Other parts of the country, like southern Mexico, have many ethnic Mayans as well, who speak Maya as their mother tongue – a language that has nothing in common with Spanish. Hola seems to be okay here, but I feel strange, like it would be better to just say Hello. 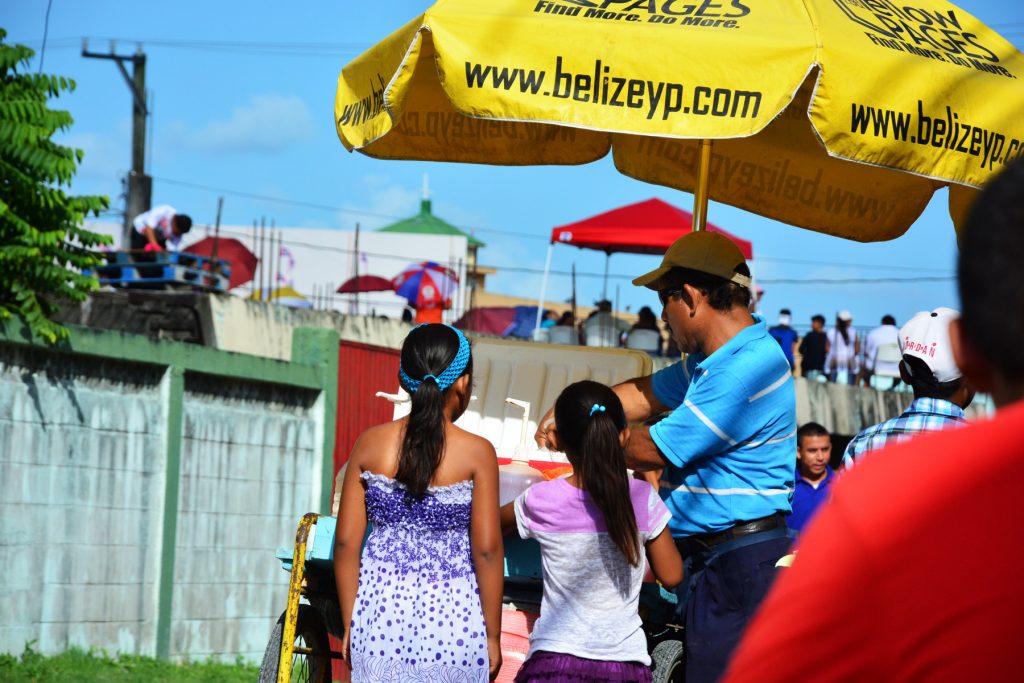 A few days later, we ask our host at the campground we are staying at about our language conundrum. I learn the phrase lo que sea. “Whatever, everyone speaks both,” she tells us, “you can pick. Spanish or English – usually either is fine.” I breathe a sigh of relief. Many, if not most, Belizean’s are bi- (if not multi-)lingual, and can speak both English and the language of their ethnic heritage. Lo que sea.

We stayed in Sarteneja for a few days, taking walks to the beach and getting some work done at camp. One day, we sit in the screened common room in hammocks at our laptops, when our host comes in to tell us a new cabin will be delivered to the property in the afternoon. It arrives on a truck, a pre-built wooden structure that looks quite handsome in the jungle scenery. The truck driver is a Mennonite, as are all of his helpers. They proceed, over the next day and a half, to get the house up on sturdy stilts and attach a wooden staircase up to its raised balcony, all the while speaking neither English nor Spanish nor Mayan. 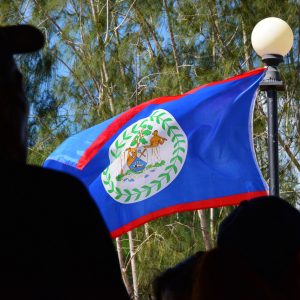 Similar to Mennonites we encountered in the first week of our trip back in Wisconsin, the Belizean Mennonites speak a language that sounds like we should be able to understand it, to us it sounds like Dutch. We later learn that they speak Plattdeutsch, or Plautdietsch, a dialect of Low German. I’ve heard, however, that if I were to read their Bible, I would understand the standard German it would be written in.

The first Mennonites settled in what is now Belize around 1958, forming small communities and often keeping to themselves. Their farms, we learn, produce most of Belize’s agricultural products – dairy, poultry, vegetables. They are easy to spot, often wearing traditional clothing that stands out from the rest of Belizean society. Their clothing is often somber in comparison to their neighbors, with hats and bonnets, overalls and long dresses. Not all Mennonites use modern technology, including motorized vehicles. Coming out of Sarteneja, we passed one family going the other way in a horse-drawn buggy.

A bit of the Caribbean, a bit of Central America

I kept lo que sea in mind as we continued from Sarteneja to Orange Walk. We happened to be there on September 21st, Belizean Independence Day. In comparison to many other places we would go in Belize, Orange Walk retained a feeling like the one that we had experienced in many towns in Mexico. Buildings hodgepodged together, lining crowded, dusty streets, food stands and eateries around every corner. Maybe it was a Mexican vibe, maybe a Central American one; it certainly felt Latino to me. 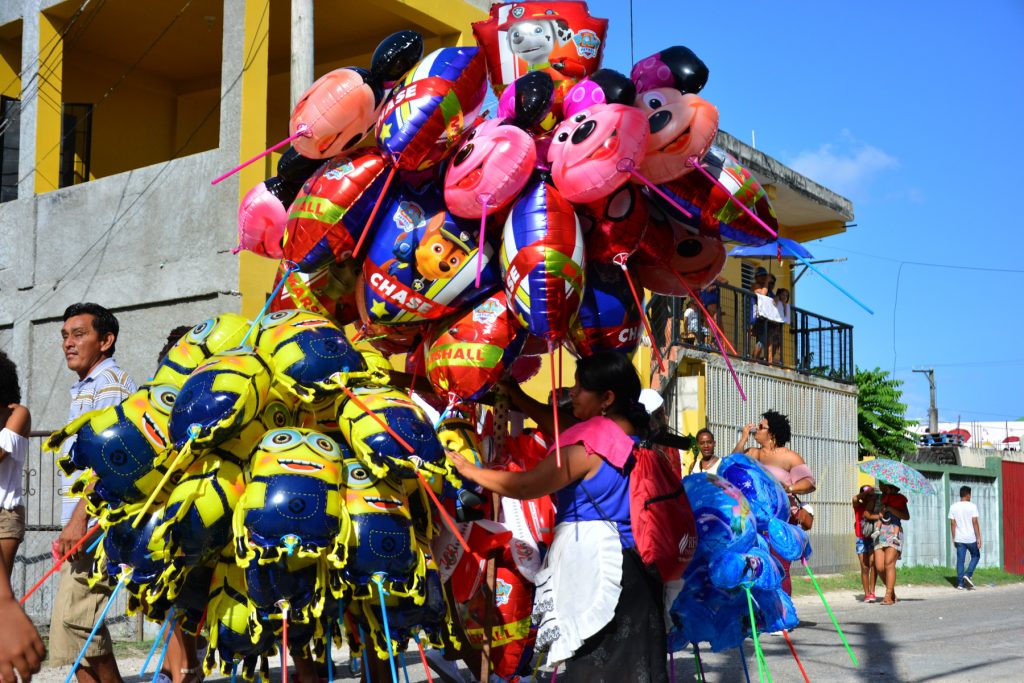 Belize Independence Day meant a fair, and fireworks, and a parade. We gathered along the streets of Orange Walk among its residents, street vendors, and balloon-merchants. Down the street came dancers – mostly women, but some men, too – dressed in elaborate, colorful costumes. By the time they got to our end of the parade, they seemed fatigued from the hot, midday sun. Despite this, many were still dancing enthusiastically, or drumming in their marching band or steel drum symphony. Languages and colors were everywhere, putting on a show to celebrate being Belize.

We’re not done yet: Garifuna and Creole and…

There are even more language options in Belize, however: Kriol and Garifuna, to name just two. Garifuna is primarily spoken by those of mixed West African, Arawak, and Island Carib descent, who have inhabited parts of Central America since the late 1700s. The Garifuna language sounds completely foreign to my ears. Kriol, on the other hand, may be one of the most interesting languages I have ever heard, with many parts that I can recognize. The Creole of Belize are descendants of former Black African slaves, mixed in with a number of other ethnic groups. 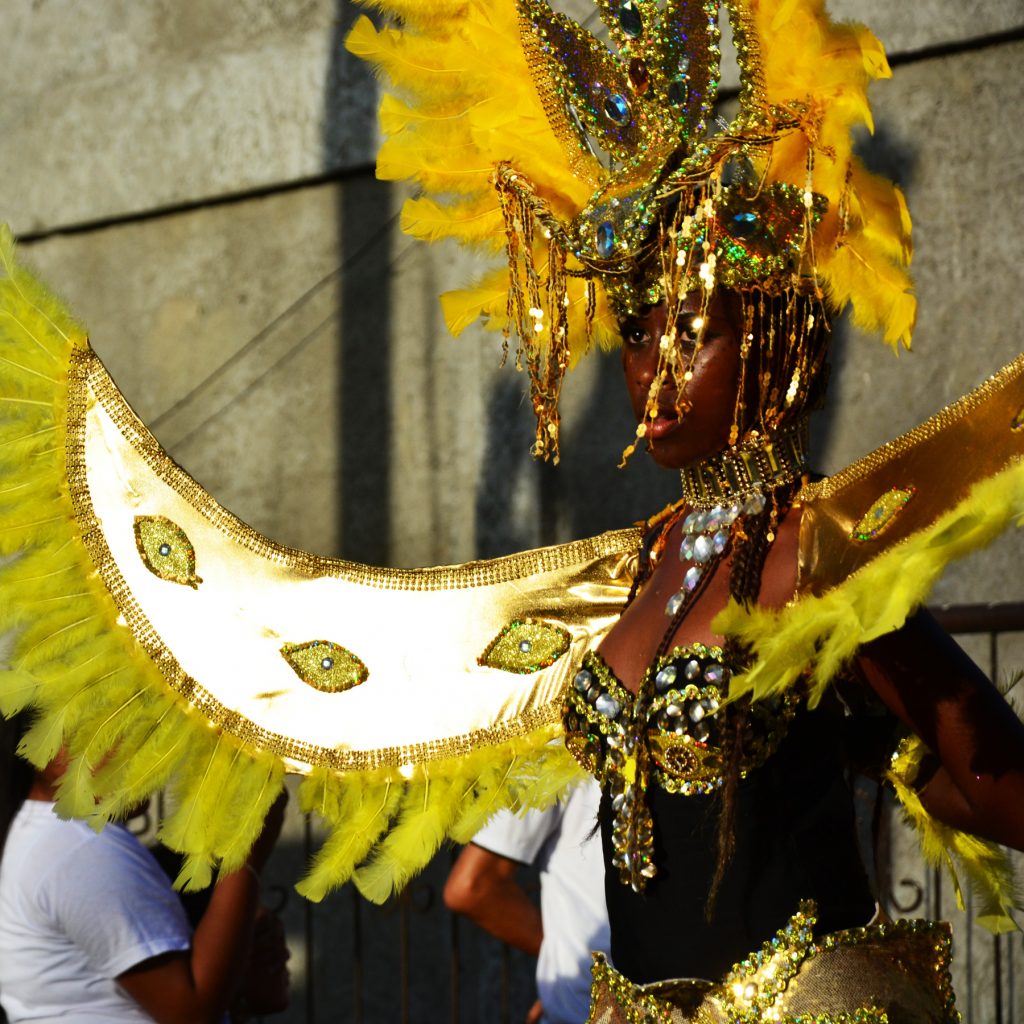 Dancer at the Independence Day parade. Although there were also some male dancers in equally elaborate costumes, female dancers were much more common (Orange Walk).

As we stood at the border waiting to cross into Belize, we heard a group of people going the other way speaking a strange mix of things I could understand and things I couldn’t (and the couldn’t was strong enough that I can’t tell you what they were talking about). Part English, part not, Creole uses perfectly understandable English words, while mixing them with pieces of language I do not understand at all. Sometimes the language molds English grammar into its own unique form; patterns that sound wrong to me. Of course, they are not wrong – no more than any dialect could ever be; they are just being used in a way that I am not familiar with. I was told I could buy an English-Creole dictionary if I wanted to improve. During our stay in Placencia, further down south on the beautiful Caribbean coast, Creole was a common thing to hear at our hostel, or walking down the street. It somehow fit the Caribbean vibe of the village.

In addition to all of this, Belize has many smaller distinct ethnic groups, including Chinese, East Indian, and a surprisingly large group of US-American expats. It was no wonder we had no idea what language to use. 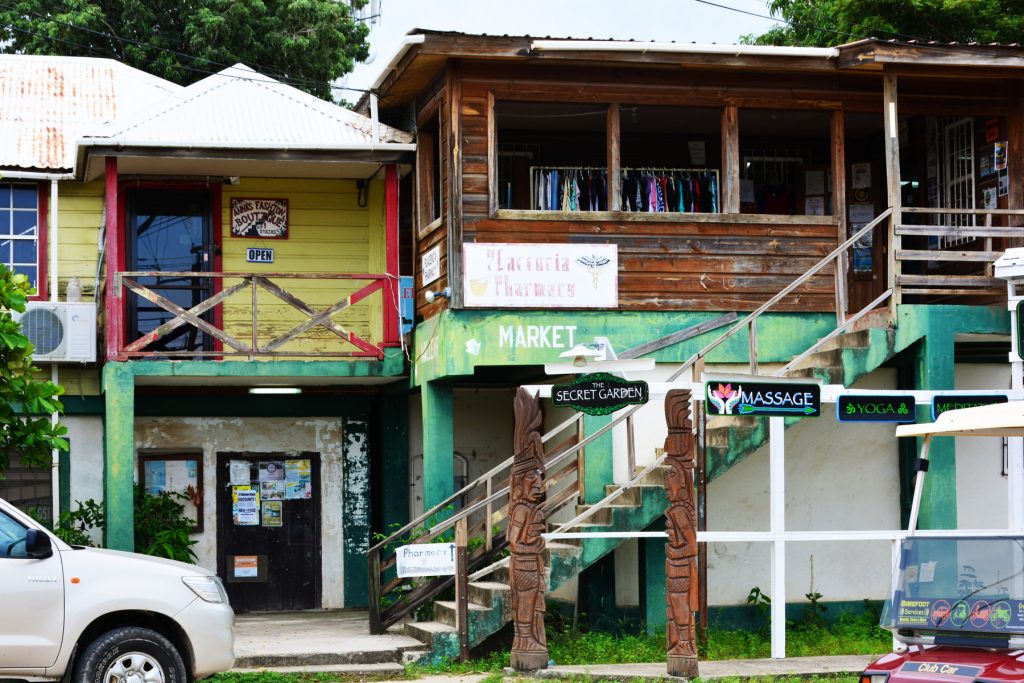 Houses on the main street in Placencia town. The language on the signs is not only because of the tourists that like to visit.

What happens when so many different ethnicities live together in such a small country? 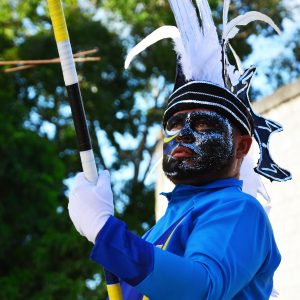 A few days into our stay, we met a girl from Singapore with a British passport. She had been living in Belize for six years, and was about to have a child there. I asked her if all these different groups meant that there were a lot of problems in Belize, if discrimination was a big issue with so much diversity in such a tiny space (for that, too, we knew about Belize: it is a tiny country, especially when you come from the context of the US, Canada, and Mexico on your travels).

“No,” she told us. “Not socially at least, people tend to be pretty respectful to each other on the street. Not everybody, of course, but that’s the same in every country.” We had noticed a certain friendliness in the air since we had arrived. More than ever, people would simply say “hi” when we drove or walked down the street. The atmosphere that Belize gave off was welcoming, friendly; different than in Mexico (not because we felt that people were at all unfriendly in Mexico; rather, because people seemed to be even more welcoming in Belize). “But institutionally,” she continued, “there is a lot of racism. Especially towards Mayan groups. With laws or distribution of national funds, to education and things like that.” I don’t know enough about Belize and their legal policies to give you an example, but I’ll take her word for it for now. 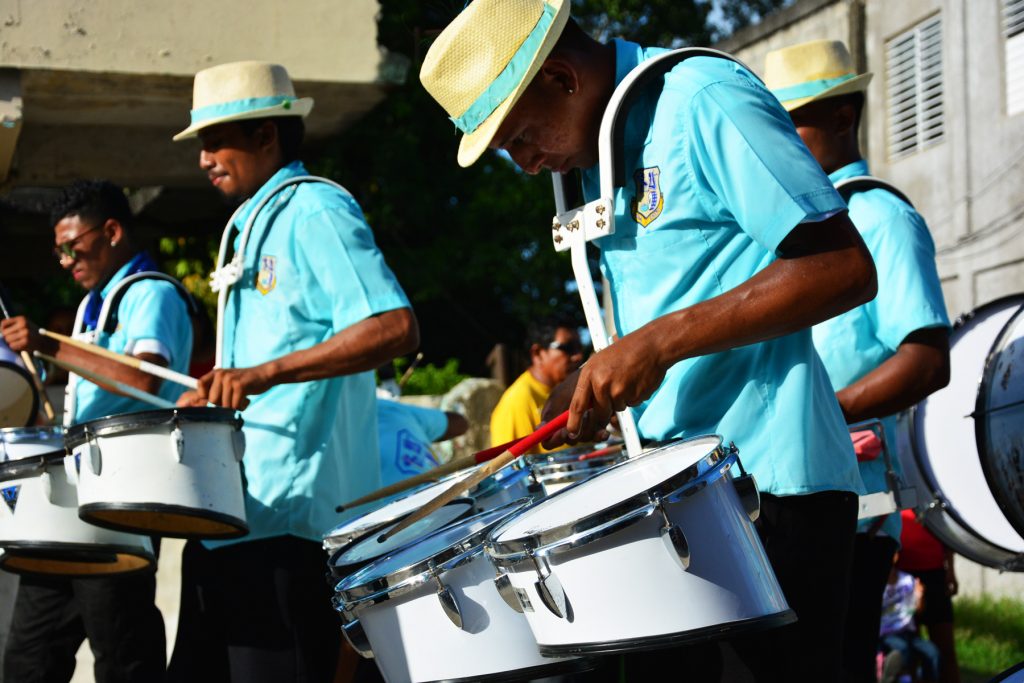 This may be the magical thing about Belize: a colorful collection of people and languages all mixed up in a pretty small area between the jungle and the sea. Although the people of Belize originate from many different directions of the globe, they manage to live together in relative harmony despite their differences. 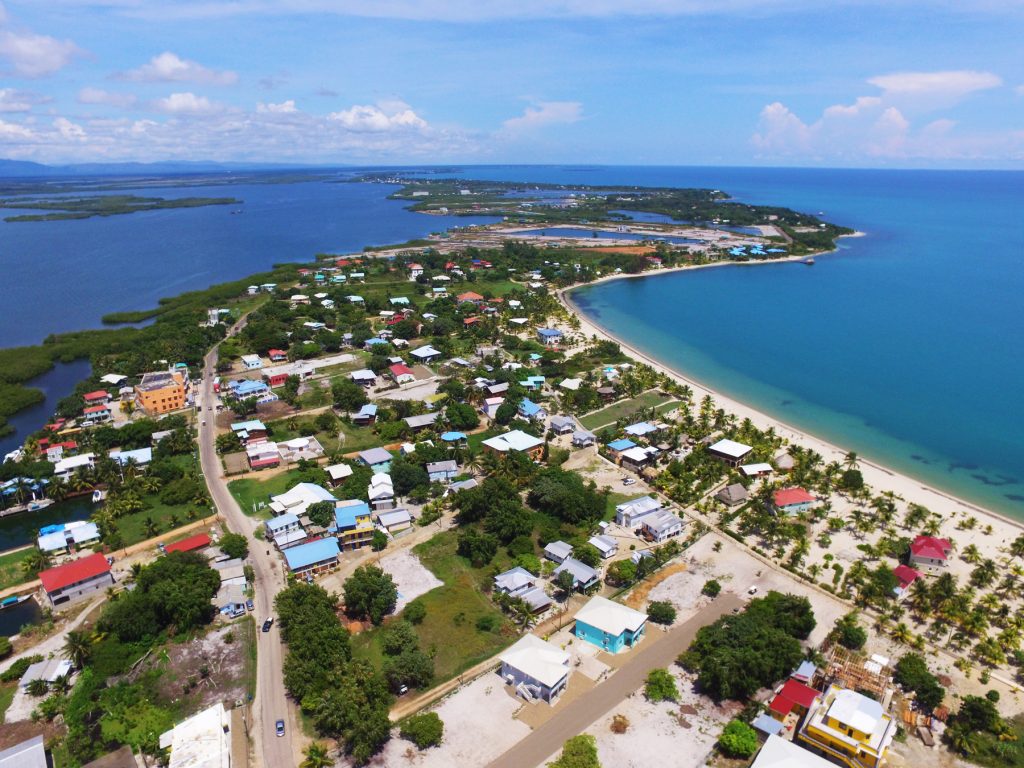