You are at:Home»Vanlife»In Sickness and in Health: Medical Issues and Vanlife 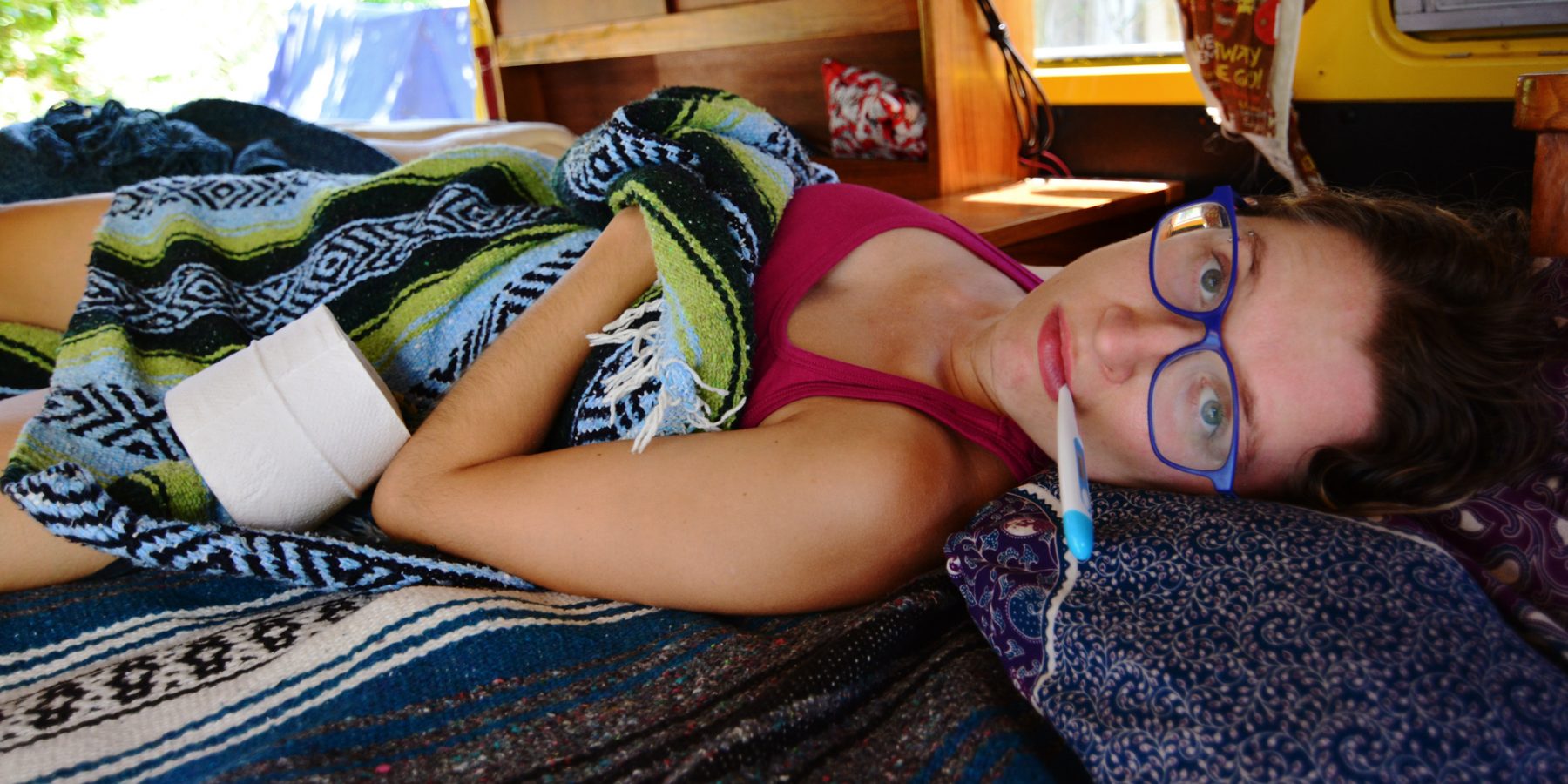 In Sickness and in Health: Medical Issues and Vanlife

The road extends straight like a line into the distance, where it vanishes in the flickering heat of the day. We’re driving at highway speed, but it feels like Big Emma’s wheels are stuck in the asphalt. Even though both vent windows are open in the front, the air is hot like it was coming straight out of the cabin heater. I notice a faint smell of sulfur with every breath, a subtle reminder that the shoreline of the Salton Sea is only the throw of a stone away to our left.
While I find the smell just mildly annoying, it must be terrible for Emma. She’s in the back, lying down on the bench while we drive, and trying to sleep. The day had started with a feeling of uneasiness for her. Something was lurking in the back of her throat; there had been the tiniest pinch of a headache, maybe a slight dab of additional tiredness in the morning.

Things are starting to turn sour

We had hit the road early and were planning to go see legendary Slab City and its anarchist neighbor East Jesus. We would climb Salvation Mountain and be tourists for a day. Then in the afternoon, we would pass the Salton Sea and roll into Palm Springs, where we could stay with our friend Kent, a fellow bus owner.
Instead, after breakfast for us and a gas station stop for the Bus, things started to turn sour. As Emma’s throat and nose clogged up, her body went into full defense mode and quickly developed a light fever and a feeling of overall nausea. If that wasn’t enough, Big Emma also started acting up, cutting out on me on the highway, even stalling completely once while going 50 miles an hour. So there I was, in the California desert, with big plans for the day and a long way to drive until the safe haven that was Kent’s house in Palm Springs.

At the Salton Sea. “Things are starting to turn sour here” might have been this guy’s famous last words.

With both Emmas sick, it was quickly decided to overthrow our plans and just try to make it to Kent’s instead. There, we would have a stationary bed for Emma and a driveway and tools for the Bus. But would we get there, with the engine cutting out every few minutes due to an unknown cause? What if Emma’s fever would suddenly get worse in this heat, what if we needed a doctor?

Thankfully, we don’t get sick very often. Maybe it’s the slower pace of life on the road. Maybe it is the outside air we breathe now, instead of the filtered and temperature-equalized AC air of our previous lives. Maybe it’s the additional exercise that we get from pushing and pulling the pop-top up and down. Or that our hands and food and general life is less sterile now. Whatever it is, it works. While I was sick every few weeks back before vanlife, I have only been sick once in a year of living in Big Emma.
But even though we get sick less often on the road, it sucks when we do. During our first week on the Mexican mainland, I started to have stomach problems. Despite my symptoms, we decided to drive up a volcano to camp. The cobblestone road curved beautifully up the side of the mountain and we managed to reach the crater just before sunset.

My stomach had held out for most of the day, but it seemed to sense that we were getting closer to our resting place for the night. With every hairpin curve, it pinched a little more. We camped on a grassy path in the overgrown crater, the volcano slumbering below us, giving itself away through a few smoke clouds rising from nearby rock formations. What if the volcano would erupt? It’s last major activity dated over a century ago, but who knew, maybe tonight was the night?

Camping in the caldera of a volcano is pretty cool. Unless you’re sick. Or the volcano erupts.

It ended up being a quiet night. The next day, I didn’t exactly feel better, but I wasn’t worse either. But what if I had? An unexpected eruption of a sleeping volcano is extremely unlikely, but countless examples in history show us that it’s not impossible, not even out of the ordinary. Just the same, it was unlikely that I would for some reason suddenly need medical attention or specific medicine, but it wasn’t impossible. And if I did, there would be no way to get it. On top of a volcano, far from the next human soul or wave of cell phone service that could emulate one.

But it’s not only the big looming possibility of doom that is a problem when we’re sick on the road. It’s the small things that make it difficult to be in the Bus when we feel like shit. Pulling out the bed to sleep severely restricts the space in the Bus. If I want to cook dinner inside the car while Emma is sleeping in the bed, I barely have space to turn around in front of the stove.
No matter how crummy I feel, I can’t just leave my stuff lying around in the Bus. If I did, there just wouldn’t be enough space to put anything anywhere. Vanlife might seem relaxing and carefree, but it actually requires a constant amount of care and discipline. This is what makes being sick such a hassle. Although I would like to just close my eyes and drift to sleep, I can’t before I have made sure that stuff is where it needs to be. Emma can’t pop the top on her own; she’s just not strong enough. This means I have to pop it, even if I feel like total shit.

Seeing a doctor often isn’t easy or pleasant at home. But it’s definitely not fun in a foreign country, with a foreign health system, and a foreign language. Therefore, we try to avoid seeing a doctor unless we have to, and instead treat our condition with the medication we have in our first-aid kit.
While getting qualified medical advice might be somewhat harder for us in Latin America than in the States or Germany, medication can be much easier to acquire. While the large pharmacy chains do honor the requirement of a prescription, there are other options. Asking around for a more “casual” pharmacy, we are sent to a hole in the wall with a counter made of Plexiglas, just around the block from the chain pharmacy. The back wall of the store is painted in a pastel blue. It is lined with Plexiglas shelves, placed far apart enough from each other to not appear crowded. From behind the counter, a pretty girl in a white lab coat is smiling at us.
“What can I help you with today?” she asks in Spanish. We ask for the antibiotic we want. She finds it on one of the shelves and scans it into the computer. “I have to ask you,” she says, turning to face us, “do you have a prescription for this?” “No, we don’t” we answer truthfully. “We don’t need it now, it’s just that we’re traveling and we’d like to have it in case we need it on top of a volcano some day.” She hesitates for a second, then she says “Let me call my boss and see if I am allowed to sell it to you.” A short phone call later, we’re leaving the hole-in-the-wall pharmacy with our prescription antibiotics in hand.

The contents of our first aid kit. Notice the antibiotics on the lower left.

We have to get off the road

Back at the Salton Sea, I’m taking Emma’s temperature. We’re pulled over on a dirt patch by the roadside, gated by the highway on one side and the railroad track on the other. The constant noise from the road is drowned in a long “tooooooot” from an approaching train. The thermometer in Emma’s mouth beeps and I check the display. 100 degrees Fahrenheit. Definitely a fever. Despite the heat and a thick layer of sweat on Emma’s skin, she’s feeling cold and wraps herself deeper into the blankets on the bed. I’m digging out the medicine box and give her two Ibuprofen pills. But that won’t be enough, we have to get off the road. We have to get to Kent’s in Palm Springs.
We didn’t choose to stop on this particular patch of dirt between highway and railroad. Big Emma started coughing and the engine lost all power, making us roll to a stop here. The same symptom we’ve been experiencing all day. For no apparent reason, the engine suddenly cuts out; we pull over, I run back to the engine compartment to see what’s up; I can’t find anything, I start the engine and we’re good for another few miles, before the whole circus repeats.
We get back on the road, hoping to somehow make it the remaining 60 miles to Kent. Emma is trying to sleep in the back, while I massage the gas pedal every time the car acts up to keep it from cutting out completely. Somehow, we limp into town and finally pull up on Kent’s driveway. He and his husband are wonderful hosts and offer us food and shelter until both Emmas are nursed back to health.

Using nothing but a medkit and our best judgment

The next day, Emma’s temperature is almost back to normal. She still feels crummy, but sleeping in a house instead of a bus has helped her a lot. And for the Bus? The most likely explanation turns out to be a bad batch of gas. After filling the tank with premium gasoline, all the hiccups are gone and since never returned. For both humans and cars, sometimes the simple solutions are the best.
Sure, in the face of a broken bone or a really high fever we wouldn’t hesitate to see a doctor. But so far, we were able to solve all our medical issues by ourselves, using nothing but our best judgment and our first-aid kit. Vanlife and traveling have taught us to rely on the crutches of society a little less. Instead, we put our trust in the people we meet along the way, and into our own ability to solve problems. One day this approach might fail us and then we’ll adapt. But at least for the last year, in both sickness and in health, we’ve been doing pretty good.
Share. Twitter Facebook Google+ Pinterest LinkedIn Tumblr Email