You are at:Home»Vanlife»Ads versus Authenticity – Social Media Marketing in the Vanlife World 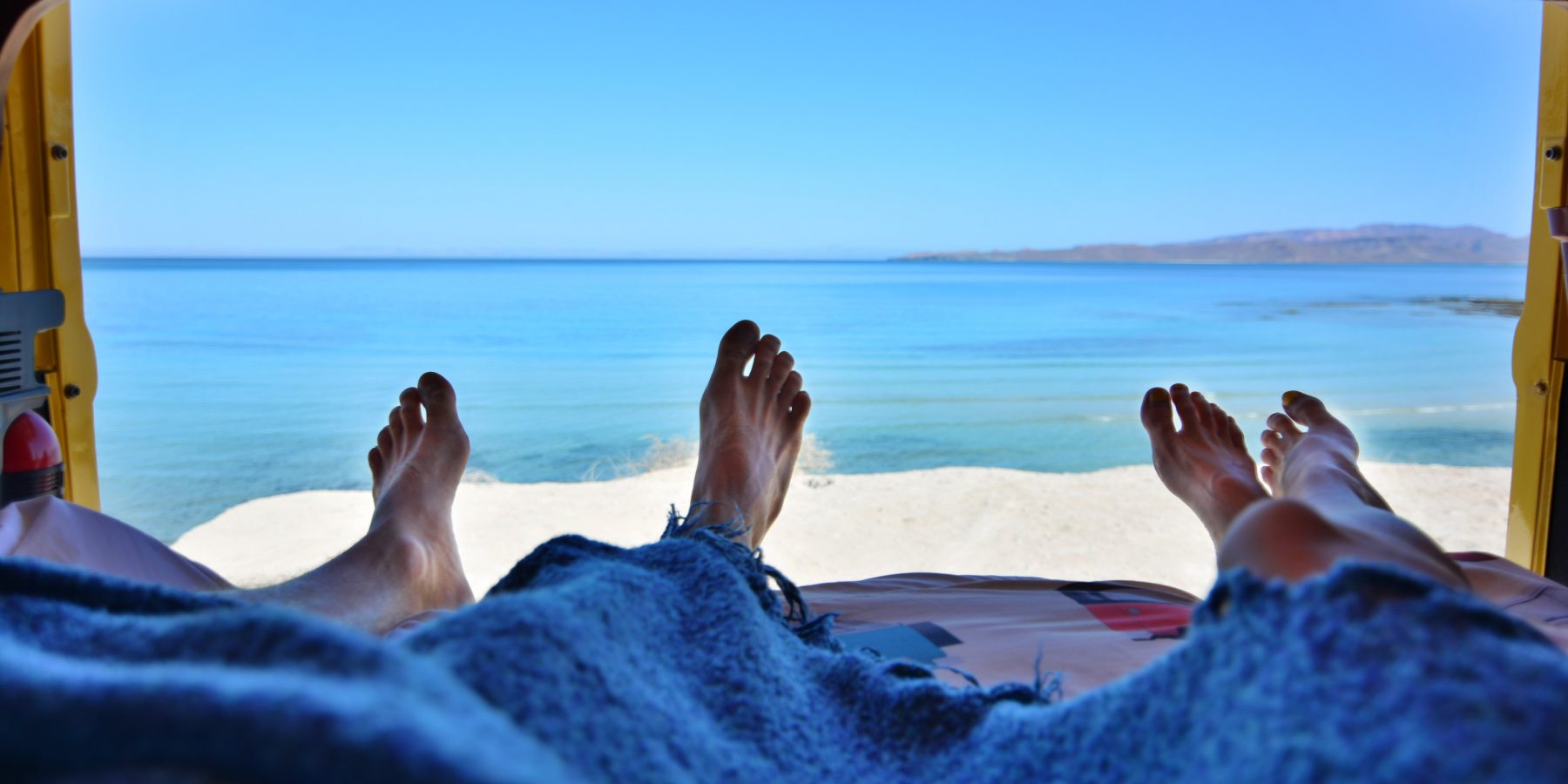 Ads versus Authenticity – Social Media Marketing in the Vanlife World

Social media marketing is big. So big, that some vanlifers can make a living posting paid content. Does this make their content less authentic? Despite recent criticism, it’s just another valid way of making money on the road.

It’s another morning waking up in the Bus. I stretch out and reach over to open the rear hatch. I pull the handle and the mechanism clicks open, raising up the door and revealing a sandy beach and ocean waves breaking onto shore only a few meters from the car. The sun warms our skin as we lie in bed, our feet sticking up into the air, feeling the light breeze and the salt in the air. Another day in paradise, vanlife perfection.
This is the story that your mind creates when it sees the cover picture of this article, or any other similar photo that can be found all over the #vanlife corner of Instagram. It is the dream that vanlife embodies. Waking up on lonely beaches and mountain tops, being free from the chains of society, living a fulfilled and independent life. Breaking out of the rat race that is college, dept, job, family, and retirement.

Let me take your mind back into the dream story for another moment. Lying in bed, our youthful naked bodies only barely covered with the bedsheets, we enjoy this perfect morning that is our life. Emma reaches over the counter and grabs a bag of chips. Kettle Brand chips to be exact. We open the bag and snack on the chips, our enjoyment of the full-bodied flavor of the chips clearly reflected in our faces, while we’re making sure the label faces your dream-self and the brand name gets ingrained into your neural cortex.
What just happened here? How do you feel about us and your dream now? Confused? I bet. Maybe even a little abused, like we tricked you into something you weren’t expecting? Understandable.

The scene I described here is fictional, but it represents a conundrum that was recently illustrated by The New Yorker magazine in an article called #Vanlife, the Bohemian Social Media Movement. It follows the life of Emily and Corey of Where’s My Office Now, who live in their Volkswagen Vanagon (a boxy 80s Bus) and have turned their life in the van into their primary source of income through paid product placement in their photos on Instagram. The couple started to live in their Bus in 2013 with the idea to be more independent and free from the chains of a desk job. “They could live cheaply in a van while placing what they loved — travelling (sic), surfing, mountain biking — at the center of their lives”, as Rachel Monroe puts it in The New Yorker.

In the beginning, Emily had a part time job as a software developer, while Corey took on different short-term jobs in the places they went. But as time progressed, vanlife became more and more popular as a lifestyle. And as their own Instagram account gathered tens of thousands of followers, they saw an opportunity. Having met other travelers who made a living with brand partnerships and product placement on their social media accounts, the couple decided to quit their regular jobs and give it a try.

In 2016, the first year of their career as social influencers, as the marketing industry calls them, Where’s My Office Now made 18 thousand dollars through endorsements, according to The New Yorker. For an entire year of income for two people, that’s not very much. It gives the two of them $1500 to live on every month, which is higher than the poverty guideline of USD $1335 per month for a two-person household, but far below the median income for an average household, which was over USD $4500 per month in 2016.
Scrolling through Where’s My Office Now‘s Instagram feed reveals the same aesthetics that define most vanlifer accounts, including our own: the van, the van surrounded by beautiful nature, the couple in the van, while doing fun and relaxing things. The general message here is positive. Living in a van means living free, it means going wherever you want to, it means having time. And in the case of Where’s My Office Now, it means eating a certain kind of potato chips, using a certain kind of toothpaste, and a certain kind of refillable water bottles. The ads are subtle, I never feel like they are obnoxiously thrown into my face.

This picture of us drinking beer at a beach on Baja would make for a decent promotion post for Tecate. Only that it wasn’t.

A mixed bag of responses

Since The New Yorker is a very high-profile magazine, and since Emily and Corey are among the most well-known vanlifers in the US, the article sparked a lot of discussions. The post that advertised the article on Where’s My Office Now‘s Instagram account has gathered almost 200 comments. Many comments are sympathetic, saying things like “Good on you guys for finding a different way”, but others are more negative. “I just read the article… For me the reason to unfollow!”, a user named lantingrobert writes. “The New Yorker did a nicely subtle job of capturing the increasingly shallow, commercial and sexist tenor of your lives as Freedom Fakes” reads another comment by somebody called edenlovespuppies. What are these people angry about? Why is their reaction to the article to stop following Where’s My Office Now? They didn’t seem to have thought that there was anything wrong with their posts before.
It is the contrast between the ideals that vanlife encompasses and the ads that leads to such shocked responses. Where’s My Office Now – and the same can be said for vanlife in general – are popular, because they have seemingly found a way out of the consumerist cycle, an alternative way to live. People follow them because they dream of one day accomplishing the same thing. And here are Emily and Corey, their heroes of the counter-culture, the ones that haven beaten the rat race, here are their shining role models pulling a Judas on them. The revelation that the people you idolize on Instagram are just average joes that use advertising to make a living might feel a little like betrayal.
Like every good marketer, Emily states in The New Yorker that they want “to bring light to companies that are doing good in the world, that are creating products we [Emily and Corey] believe in”. But even if that may be true, it’s also true that the offering of money can go a long way to help people to “believe in a product”, as long as it’s not arsenic dental floss.

Some people criticize the staged nature of pictures on Instagram. But it’s sometimes the only way to capture a moment and it doesn’t mean this moment never happened. Emma did read Steinbeck’s The Pearl, and she did it on this beach. But we didn’t take a picture, so we staged this one a day later. Does that make it fake?

From a consumer perspective, I understand the disappointment. But as a vanlifer, I also see the other side. As much as we might want to, as much as the vanlife hashtag might convey this, living in a van does not let us step out of society. Even if we can significantly reduce our carbon footprint and spend more time in nature, we still need money to buy things, we still need to work to make a living. And if we want to combine our nomadic lifestyle with a regular income, our options are somewhat limited.
Or in other words, we have to get creative. Some of us work remotely in pretty regular jobs. Others freelance or work half of the year and travel the other half. Where’s My Office Now decided to try to use the life they already lived as a way to make money. The fact that their Instagram now contains pictures of them consuming products they may or may not actually like doesn’t make their overall message any less true. It doesn’t mean they don’t live the life they portray. Yes, they use their popularity to promote stuff, but they still live in their van, don’t have 9-to-5 jobs, can travel from California to the east coast and back any time they like, and can go surfing while everyone else is at work.

As a friend and fellow vanlifer recently pointed out, the content that creators put on Instagram, Youtube, or really any other social media platform, is made by these people for free. We all are so used to the idea that content on the Internet is free that we are even irritated when a publication like The New York Times installs a paywall and charges for content. It just doesn’t feel right. But as much as it’s fun to post pictures on Instagram or write blog posts, it takes time and energy. Time that cannot be used to work for money. Or to travel.
We all have to make a living, and although content on the Internet is often free, it has to be “paid for” somehow. Did you happen to notice the ads on The New Yorker article when you clicked on the link above, for example? Did you wonder why you could read it for free? Although I don’t consider it an option for GoBigEmma, I do see influencer marketing as a valid way to make a living on the road.

Consumers get all of Instagram, Youtube, and websites like this one without paying a cent. Depending on our choice of income, it may have ads. Being a conscious consumer, you should be able to realize the function of advertisement for us creators. It’s the trade-off for getting it for free.

Me writing this very article. Vanlife isn’t all fun and games, it’s also work, like any other way of life.

As the sun warms us and we grow more awake, we fight the urge to get out of bed. Just a little bit longer. Then I peel myself out of the covers, I put some clothes on and open the sliding door. I go pee into the dunes and then boil water to make coffee. After breakfast, we open our laptops, and I turn on the wifi hotspot on my phone. Although we’re on the beach, there is work to be done. Welcome to another day in vanlife.
Share. Twitter Facebook Google+ Pinterest LinkedIn Tumblr Email