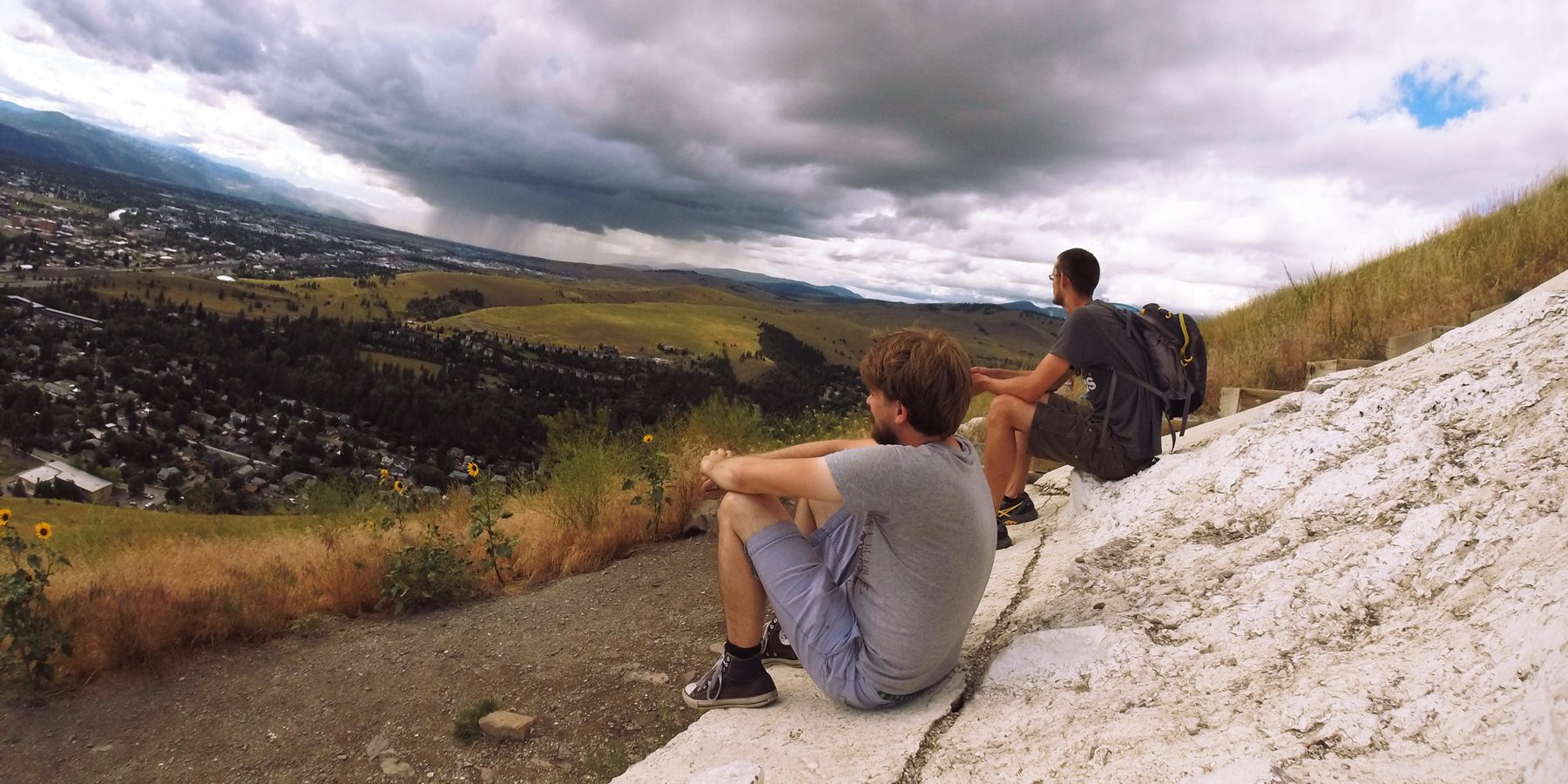 Missoula is for… everybody?

The city of Missoula is a melting pot of the hip outdoorsy and the classic Old West, and we couldn’t help but wonder about those subtle differences that make this place stand out from the crowd.

We rode into Missoula, Montana at dusk. The sun started hiding behind the mountaintops that rise up high on the side of the interstate. We usually try to avoid major highways when we can. But here, the combination of Montana’s inaccessible mountain ranges and the fact that we had almost been driving three days straight, only stopping to eat and sleep, made us throw our reservations overboard. Strong wind gusts made driving more stressful than I would have liked, but we were doing fine. We had wanted to get up here from Denver in time for the 4th of July. It was the evening of the 3rd, and we felt good about finally making it.

While riding the car into the gusts, pushing the steering wheel hard into the wind, I thought about what I knew about Missoula. A German exchange student got shot here a few years back, gunned down while breaking into someone’s garage in search for booze. The guy who lived there said he hated all the fucking teenagers who kept stealing liquor from his garage and he had waited for the opportunity to kill one of these fuckers. The kid is dead, the shooter went to jail for life. I don’t know why this is the first thing that comes to my mind. Maybe it’s true that we remember negative events more easily than positive ones. Kinda depressing. What else do I know about Missoula? Our friend Niels lives here, the reason we’re going in the first place. They are supposed to have good beer. That’s about it.
We took the exit into town and made our way towards the address Niels had given us. Old and overgrown houses lining quiet streets, charmingly run down, not in really bad shape. An old school bus is parked next to an alley, painted green and obviously re-purposed as a home. This seems to be a good place for vanlife.

A few days later we had met many of Niels’ friends, spent the 4th of July in a gorgeous cabin on Flathead Lake, helped Niels brew a patch of beer, and my mental picture of Missoula and its people had evolved from a ghostly shape into something much more solid. Missoula is many things, many things I thought to be very contradicting before coming here. But in this town, they fit. Missoula is hip. A little hunch of San Francisco or New York hipsterism. But not the slick rich kind you find in those places. You can be a bum living in a school bus and a hipster at the same time in Missoula. And even though we’ve been going west for a while, it was here I really understood: This is the West. Bearded men with cowboy hats drive huge pickups around, their dirt bike on the back. They have a shotgun and a dog on the passenger seat. But in Missoula, these guys also go mountain biking and enjoy a locally-brewed craft beer at the end of the day. Hiking, snowboarding, mountain biking, these are the things Missoulans fill their free time with. Stereotypes get mixed up, pictures blurred.

One evening during our stay we hung out with Niels and his girlfriend Olivia in her yard. A few friends of hers came over, we had beers and talked. Suddenly, a huge buck walks by, antlers and all, right through her neighbor’s yard, just 10 meters from us. Behind him follows a deer, stopping here and there to chew some leaves off the bushes in the garden. I had never seen a buck that close; this tall, elegant creature just walking by us humans sitting there with our beers like it’s the most normal thing in the world. And apparently, in Missoula it is. While Emma and I were in awe, everybody else seemed to be at least bored, if not annoyed by the animals. “Yeah, we have them all the time. They keep eating the veggies in all the gardens”, someone said. The deer continued on, and the moment was over. The conversation went back to gun violence, but the feeling that something awesome had just happened stuck with me all night.

Guns. Another of these things. Maybe it’s the West, maybe just the usual madness of the USA, but guns are important here. Olivia told us you can bring a gun to school in Missoula, you just have to leave them in your car. No safe or locker, students and teachers just have them sitting on the seat, so they can go hunting after class. “One day the school was on lockdown until 9pm, because somebody broke into a teacher’s car and stole his guns.” We talked about this, sipping our micro brews, interrupted by the deer, and I wondered how all this fits together. Missoula is an odd mix of outdoorsy environmental hipster liberalism and classic Western American conservative values. Thrown in are a gorgeous mountain scenery, a laid back vibe, and an active music and bar scene. We had a great time in this town. It’s a good place to be if you like the outdoors. And inclines, and deer in your garden. And maybe guns. I wonder how the German exchange student liked Missoula.