You are at:Home»the Bus»A Story of Despair, Samba, and Compression 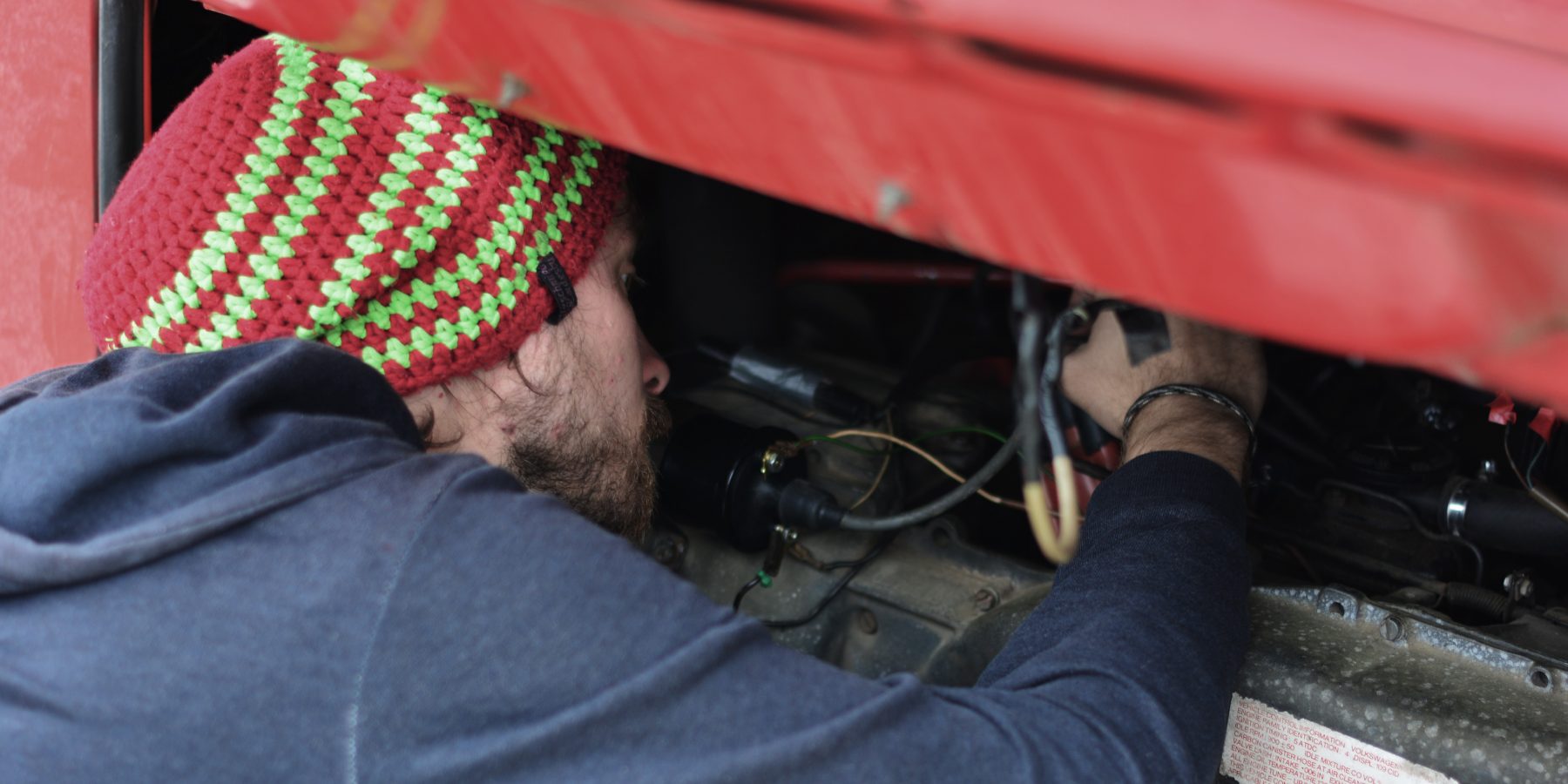 A Story of Despair, Samba, and Compression

The VW community is more than we could ever wish for, providing not only mechanical help when we need it the most, but also a sense of home as we meet like-minded friends in places we’ve never been to.

I’m staring at the gauge in my hand. “0 PSI”, it reads. No compression, nothing. I’m getting nervous, I can feel sweat starting to build up on my skin. Did I not connect the hose right? No, I know I did. Let’s do it again, maybe something went wrong, a fluke. I press the pressure release button on the gauge, even though the whole problem is that there’s no pressure. I let the gauge lean against something in the engine compartment. It’s a round meter and looks a little bit like a clock, except that it reads pressure instead of time. The round clock-like thing sits on top of a rubber hose, which is screwed into the bus engine in one of the spark plug holes.

There is lot I don’t know about engines, but I know this isn’t good

I walk to the front of the car and get into the driver seat. Calm down. I’m sure it’s just the gauge, for some reason it didn’t register the pressure. But this time. I turn the key in the ignition and the engine starts cranking over. I count the turns. One, two, three, until it gets to eight, then I stop. Back at the engine bay, I take a deep breath and look at the gauge. Fuck. Still nothing. No compression in the cylinder, which means this cylinder doesn’t fire. It’s dead like the hunk of metal it is made from. It gets dragged along by the other three cylinders, pushed up and down against its will, sprayed with gasoline and tasered by the spark plug right after, again and again, on every stroke. Instead of compressing the air and fuel mixture like the other cylinders, this one has a hole somewhere where the air can escape and no pressure builds up. The sweat is getting more. I’m feeling panic crawling up in me, taking over my stomach and creeping upwards into my chest. My thoughts are numbed. There is lot I don’t know about engines, but I know that low or no compression is not good. Not even a bit. Shit. Shit shit shit. What now?

These are the kind of situations where I ask myself “Was it a good idea to head out into the world in a 40 year old car that needs frequent maintenance and care that I am hardly qualified to provide?” “Maybe it would have been better to learn more before hitting the road?” “Maybe I shouldn’t have gone?” The truth is, I am no mechanic. Before this adventure, I had never worked on a car. I am an engineer, but my field is chips and computers, not combustion engines. The truth is, this new job, being the caretaker of this car, can be a little overwhelming at times. The truth is, I often feel lost.

Whenever this happens, I have to remind myself to keep calm. Set the problem aside, breathe, turn up some music and relax. So far on this trip, we haven’t encountered a problem that required a commercial shop to fix it. So far, we have managed to fix every problem ourselves, or have had others to help us fix them. And there is help out there. A lot of it. Volkswagens, especially the old aircooled ones, have a community behind them unlike any other vehicle I know of. When we couldn’t make it out of a very steep driveway on Vancouver Island, Greg and Josh, two members of the local VW club, drove out 45 minutes to us to help push us out. They then took us to another buddy’s house and together they spent their entire Saturday working on our car with us.
And then there is the Samba. An online forum for VW enthusiasts. A helpdesk for all types of mechanical questions surrounding buses, bugs, and other older Volkswagens. A meeting point for the community, a way to connect with like-minded people along the way.

With the help of the people on the Samba, my job becomes manageable. I can ask a question and chances are I have a useful answer within an hour. Buses have been around for a long time. So have the problems they produce. Whatever symptom I have, chances are somebody on the Samba has seen this one before and knows what it is. And chances are many people have fixed this issue before and can give me advice about what to do. With every problem and every question, I learn a little more and have to ask a little less.
But it wouldn’t be as much fun if the Samba was only a mechanical help page. It’s the community that makes traveling and living in a car like Big Emma special. Over the last weeks, we have attended VW meetups in several cities. We have met people we’ve known online and that had helped us before we ever saw their faces and shook their hands. We’ve made friends that we would have never met, was it not for Big Emma and the Samba to connect us.

We use the community for mechanical help, for the peace of mind that advice is never far away, and we enjoy the pleasure of having friends and places to stay in towns we’ve never visited before. But we also try to give back. We post about the progress of our journey, about Big Emma’s health. Whenever we figure out something new, we share the newfound knowledge with the community. We try to meet as many people as we can along our way in person. We try to help others with their problems.

I can’t imagine other cars drawing a group of people like this. I cannot imagine being invited to a Saturday BBQ party because I drive a Ford. Or a Honda. But we are experiencing exactly that, just because we drive a bus. And we meet the most amazing people doing so.

Of rockers and rods

So what now? The dial on the gauge still reads 0 PSI. We’re in Seattle, staying in Andrew’s driveway, a fellow Samba member and bus owner. He’s working on something in his garage, while we are parked behind his house. I walk over and tell him about my discovery, fearing he’ll say something like “Yeah, that’s it for your engine I guess.” But instead, as if he had just done it the other day himself, he goes “Have you checked your rocker arms and lifter rods? Maybe a rod has popped out.” A spark of hope ignites somewhere in me. No, I haven’t checked that. I didn’t even think of the possibility that this could happen.

In only a few minutes we have the rocker assembly out and I’m holding the pushrod in my hand. Alone, this would have taken me at least an hour. It’s not a hard job to do, but the uncertainty of never having done it would have stalled me numerous times, rethinking, discussing with Emma. We make sure the rod is not bent and put everything back together. Did it solve the problem? We put the gauge in place, crank the engine, and sure enough the scale reads 95 PSI. I’m overcome by a feeling of huge relief, all the pressure in the cylinder seems to have come straight out of my guts. I breathe out and feel almost dizzy.

By the side of the road on my own, I would never have solved this problem. But with Andrew’s experienced help, it was a 30 minute job. And there was even time to go for a beer afterwards. What better community could we wish for?